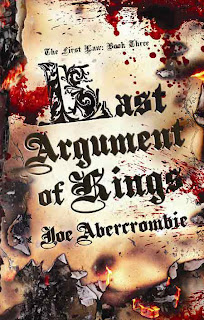 Last Argument of Kings, by Joe Abercrombie, is the third and final book in The First Law trilogy.  (See my reviews of the first and second books.)  In this last, violent and dark story, we see characters drift apart, reunite, and then drift apart again.  Sometimes physically and sometimes emotionally.  Often both.  The Union is under great threat not only from Bethod in the north but also from the Gurkish in the south, and everyone is converging upon Adua.  We learn a great deal more about several characters in this book- their spotty histories, their many mistakes and their quests for power.  We see them struggle through their actions, face down their loud and clamoring consciences and try to survive to the end of the book.  It is a dark and deeply troubling novel, but one that lays bare all the difficulties and the trappings that come with power.

I am glad I read Joe Abercrombie's trilogy but I admit a sense of relief that I am now done.  It was hard, even as a reader, to be bogged down in so much corruption and two-timing and despair, and I'm glad to have come up now for a much-needed breath of fresh air.  This book is not a happy one.  That's not to say that there aren't happy moments, or funny ones.  But far fewer than in the last two books.  And it ends on such a teetering note- you aren't quite sure what happens next.  I am an optimist and hope for the best, for a happy continuation of the story, but from my knowledge of the books, I fear that Abercrombie would not provide a road to a weary but somewhat happy ending for me.

This book reminded me a bit of the ending to The Lord of the Rings, in that there is a sense of weariness and dejection at the end, of having worked so hard and to have only rubble remaining.  I feel that must be how much of Europe felt after the end of World War I, and I can't imagine the heartache that came with that.  There was so much violence in this book.  So much sadness.  I skimmed many of the battle scenes, as I usually do with epic fantasy.  But those weren't even the most depressing parts.  Instead, the parts that most hurt to read were the small betrayals, the back-stabbings, the complete lack of trust or faith in anyone else.  It was hard to read.

But it was fascinating, too.  The characters are so complex, so absolutely enthralling.  They all have so many motivations, so many goals.  My favorite character, Glokta, compares his life and his loyalties to juggling far too many very sharp knives.  I think that is an apt description for the lives of everyone in this book.  They all have so many shifting priorities, so many different deals to strike, so many allegiances to shift.  To me, the characters make this trilogy stand out among many epic fantasy novels that are written with similar themes and stories.  Each character has so many nuances; each was a delight to get to know.

I appreciated that even though the book ended, the story did not.  It is very clear at the end that while the general arc of the story's plot has been resolved, there is another story bubbling up to be told.  I can imagine how Jezal and Glokta come to terms with each other after the book is done, doing their best in a difficult situation.  I can see Ardee settling into her new life.  But at the same time, I can see Logen Ninefingers and Ferro once again going back into the same cycle they came from... and beginning anew, in the same way.

Last Argument of Kings is a multi-faceted and gritty end to a very impressive epic fantasy trilogy.  I enjoyed it and look forward to reading Abercrombie's newest book, Best Served Cold.  I also hope he returns to The Union, to share with us the way everything fell out after the end of Last Argument of Kings.  However, for now, I am turning to a more gentle book.
Musings by Aarti at 12:08 AM