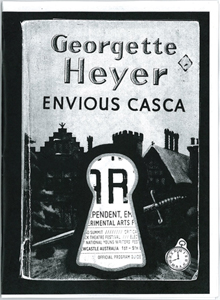 Favorite Line:  He was like a clumsy, well-meaning St Bernard puppy, dropped amongst a set of people who were not fond of dogs.


Plot Summary:
A Christmas house party is arranged at a wealthy old bachelor's house against his wishes.  Present are his brother and sister-in-law, his nephew and niece, a playwright, a ditzy beauty, a kind Plain Jane and a business partner.  These personalities collide, however, and the house party is more explosive than congenial.  Then the host is found dead in a locked room, and suddenly, everyone is a suspect.  Inspector Hemingway must sort through the lies and the politics to determine who killed the wealthy host.  And what does The Life of the Empress Catherine have to do with everything?

When I am not sure what I want to read next, I always turn to Georgette Heyer because I know I'll settle in quite easily with her books.  I never feel restless reading her.  I know I'm always in for a good story.  And as this one takes place during Christmas, it seemed the ideal time to sit down with it!

I read almost all Heyer's historicals (though for some reason, I just can't bring myself to read Cousin Kate or any of the older-than-Georgian era ones) when I was in high school and early in college, all in a big blitz.  But I've collected her mysteries more slowly over time, and I've really enjoyed taking my time getting through them.  Heyer wrote some historical mysteries, but most are set in the England contemporary for her time- usually between WWI and WWII.  And, as Heyer was nothing if not a product of her time, they tend to have a great many subtle hints about the class system, money and Modern Times.  Much as I love Heyer's work, I know deep down that she was probably a fairly haughty woman who believed in a class system.  I also know that she looked down on fans of her work.  Oh, well!

For some reason, the characters that populate Heyer's contemporary mysteries are not nearly as easy to empathize with as those in her historical novels.  The mysteries are usually populated with rude and unkind people, most of whom dislike each other and the person who was killed.  I don't know why this is the case, and I'll spare you all my psychological theories :-)  However, even with generally unlikable characters, Georgette Heyer can write a very good story.

This one is no exception.  Even though most of the characters were unlikable, their conversations were hilarious.  There were so many snide remarks, so many one-off insults and so many ridiculously funny situations that it was impossible not to giggle.  And the mystery, too, really caught my interest.  Though I had an idea of who committed the crime early on in the novel (which is saying a lot, as I never know those things), it was very interesting to see how it happened.

One aspect of Heyer's contemporary mysteries that I dislike somewhat is her tendency to pair off people romantically towards the end.  The romance in this one you can see coming probably from very early on, so no spoilers.  But it upsets me when a man, for the entire course of a novel, is rude and sometimes downright cruel to people (regardless of whether it's justified or not) and then suddenly realizes he is in love with the nice, plain girl.  And the nice, plain girl decides he's the man for her.  I mean, really!  Is he going to act differently after marriage?  Why does he deserve such a nice person?  I hate when that happens, and it happens so often in books.

Ok, off that soap box.

That's my last review for the year, so hope you all had a merry Christmas and best wishes in the new year!
Musings by Aarti at 12:07 AM