Review: Curse of the Tahiera 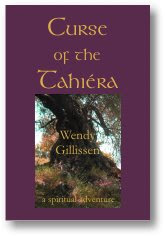 Title:  Curse of the Tahiera

Rom has had bad luck his whole life.  He was born illegitimate to a mother who did not want him, and then sent away to be a page at the home of a cruel and ruthless lord.  His whole life, he has been feared and reviled due to his appearance; he is half-Tzanatzi, and those people are hated for invading and destroying an entire way of life.  He ran away from that existence, and hasn't looked back since.  One day, at a bar, he meets an older gentleman, Yldich, who says he will accompany him on his travels north.  The two travel together, and Yldich teaches Rom how to confront his past and his fears, and slowly reveals to Rom that he has an important purpose in life.

The two continue on their travels northward, picking up some friends along the way, until they reach Yldich's home, The House of Deer.  There, Rom must come to terms with who he is, his Tzanatzi past and use his power to try to save a whole population of people from destruction.

This is much more in the traditional "quest and war" fantasy tradition than most fantasy novels I've read recently.  It begins with a young man who sets out on a quest with the help of an older, wiser mentor and a few friends.  He finds that a Greater Destiny is in store for him, and also manages to fall in love along the way.  Really, I have nothing against the traditional fantasy format.  I enjoy quests.  I like magic.  I like the way fantasy is evolving these days, but I also appreciate where the genre came from.  And Gillissen is a traditionalist.  She creates characters with problems and has them solve them.  She creates languages that seem pretty Tolkein-esque and provides a glossary for words at the end of the story.  She has respect for fantasy novels and is pretty good at writing them herself.

I enjoyed Curse of the Tahiera, as most readers did.  However, I did think it moved a bit slow and got fairly repetitious.  We don't even see the word "Tahiera" in the book until more than halfway through the story.  I thought the story would center around the quest to get north, but instead, the first half was focused on the northward journey and the second half focused on the impending battle.  I actually enjoyed the first half more, as there was more of a sense of anticipation.

Once they got north and settled into the routine of being home, the same thing happened a few times.  Rom would fall asleep, or have some sort of emotional issue, and then escape into the dream-world where he would see into the past.  Then he'd wake up scared and sweaty and attempt to leave Yldich and his friends to "keep them safe from him."  This is fine the first few times, but really... how often does Rom need to be told that he is welcome and safe?  It got a little old after a while.

However, the more you learn about Rom and his complicated life, you can see why he'd have so much drama.  I just wish some of it was dealt with off-screen, as it were, instead of always being confronted by his emotional breakdowns and introspection.

The story is interesting because the struggles that Rom faces are much more internal than external.  Just as important as winning the war and defeating evil are the battles that Rom must deal with himself.  His mastery of his sword is only as important as his ability to trust his friends and their faith in him.  A lot of what he faces, he must face on his own.  He has the support of his friends, but it's ultimately up to him to forgive and move on.  I liked this part of the story a lot.  Gillissen drew Rom well as a character.  There were also ample light-hearted and touching moments in the story, to contrast against the more serious ones.

I also liked how Gillissen highlighted how much of conflict is due to misunderstandings or miscommunication.  People can get angry over some things, and then their perceptions can be skewed.  And one thing can easily lead to another to another, until all snowballs into chaos.  I liked how she showed things as not being black and white, and gave everyone a reason for behaving the way that they do.

Overall, I really liked this book.  It dragged a little bit and the second half, especially, was littered with typos.  But it was an absorbing read, and I liked being back in an epic fantasy setting.  Also, props to any fantasy author who tells the entire story in one volume, and not three or more.  There is a preview of a related sequel at the end of this book, but Curse of the Tahiera ends with all stories knotted up, so there's no cliff-hanger feeling.  I look forward to the next book.
Musings by Aarti at 9:39 AM