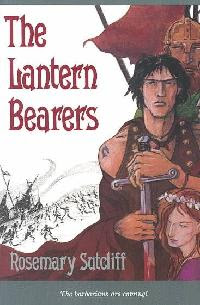 This is one in a series of loosely inter-related books called The Dolphin Ring Cycle, by Rosemary Sutcliff.

Favorite Line: "Morning always grows again out of the darkness, though maybe not for the people who saw the sun go down. We are the Lantern Bearers, my friend; for us to keep something burning, to carry what light we can forward into the darkness and the wind."

Plot Summary:
Aquila served in the Roman cavalry and came home to Britain for a short vacation to see his family. Shortly after his arrival, he heard that Rome was deserting Britain because it was too much trouble to defend. Aquila deserts the army and stays behind to defend his home. However, the Saxons soon raid his home; his father is killed, his farmstead burned to the ground, his sister kidnapped and he is taken as a slave. He lives in the Saxon camp for several years, honing his hatred of those that betrayed his family and hoping for a chance at revenge.
When the chance to escape finally arrives, he seizes it and goes off to find the man who turned traitor on his father. That man, however, has already died and Aquila is left adrift, unsure now what motivates him to live. Seeing very little else to do with his time, he offers his fealty to Ambrosius, the Roman favorite to unite Britain and drive out the Saxons. He spends the rest of his life working for him, training horses, fighting battles and eventually marrying and having a child.
But he's a difficult man who holds his anger and bitterness inside, to his own detriment. he has few friends, his family hardly knows him, and he cannot forget his sister. The Lantern Bearers is more a story about one man's journey of self-discovery and forgiveness than it is a prequel to the Arthurian legend we all know and love.

It is only when I read books that were marketed as "young adult" a few decades ago (this one was first published in 1959) that I realize just how little credit we give young people today. Luckily, that trend seems to be changing for the better, and I think there are a lot of great young adult books out there today, particularly in the fantasy genre. But this book is intense for someone entering middle school. It is much more psychological drama than anything else. Yes, there are war scenes, but those pale in comparison to the over arcing drama of Aquila and his inner struggle. Very deep stuff!

I really enjoyed this book. It was my second choice for the readathon and though I admit that, due to tiredness, I skimmed most of the battle scenes, I still found it enjoyable. Enjoyable enough, in fact, that I am sticking to reading its immediate sequel, Sword at Sunset, instead of dropping it for the copy of Unseen Academicals that just arrived in the mail for me today. If that isn't high praise, I don't know what is.

Aquila is a very troubled and angry man. It is painful to see how isolated he is in his life, and how deeply he feels it. The most moving passages in the book, for me, were the ones in which he felt the huge gap that existed between him and his son. He would sometimes try to bridge it, but he felt it was so far a jump to make that he often missed his chance to do so.


They looked at each other through the smoke of the windy fire, through the barrier that had always been between them... Aquila, watching [his son] disappear into the dusk, thought suddenly and painfully of all the things he would have liked to say...


There are so many passages like that, between Aquila and his son and Aquila and his wife, that make the reader ache for the poor man. He doesn't make it easy for those around him to like him, but we, the readers with access to his self-doubt and distress, can't help but sympathize. What makes it even more sad is that Aquila was so very close to his own father that he feels the chasm with his son even more.

How many young adult books deal with the parent-child gulf from the parent side? Not many, I'll bet.

While Aquila is by far the centerpoint of this story, there are several meaningful and well-constructed secondary characters. The one I liked most was the monk, Brother Ninnias. He is so patient and forgiving and kind; I think he does a lot to help soothe Aquila's wild emotions. Ambrosius, too, is a larger-than-life character; he is a king that the people love and die for. And, waiting in the wings of destiny, there is Artos. I enjoyed reading this prequel to Arthurian legend because it was really fun and interesting to see Arthur as a young person, and not at all as the centerpoint of a story. Instead, we get glimpses of him that hint at what is to come, but he is in the background.

I also thought that Sutcliff described the life of women in the time period very well. None of them are allowed to make their own decisions and most lead lives they would never choose for themselves. But they make the best of it and try to be happy in a very inhospitable world. While women also were very much in the background of this novel, they were believable and interesting.

So really- I enjoyed this book! I am also about 1/5 of the way through Sword at Sunset and enjoying that one, too. I don't know if I'll like Sutcliff's take on Arthurian legend as much as I do Mary Stewart's, but I like Arthurian tales so much that I am willing to give them all a chance! Well, except for stories told from Guinevere's point of view...
Musings by Aarti at 6:15 PM