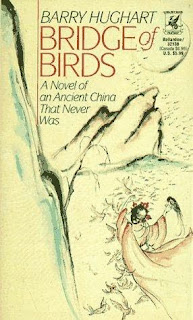 Favorite Line: "Take a large bowl," I said. "Fill it with equal measures of fact, fantasy, history, mythology, science, superstition, logic, and lunacy. Darken the mixture with bitter tears, brighten it with howls of laughter, toss in three thousand years of civilization, bellow kan pei - which means "dry cup" - and rink to the dregs." Procopius stared at me. "And I will be wiser?" he asked. "Better," I said. "You will be Chinese."

Amazon.com Review
Bridge of Birds is a lyrical fantasy novel. Set in "an Ancient China that never was", it stands with The Princess Bride and The Last Unicorn as a fairy tale for all ages, by turns incredibly funny and deeply touching. It won the World Fantasy Award in 1985, and Hughart produced two sequels: The Story of the Stone, and Eight Skilled Gentlemen. All present the adventures of Master Kao Li, a scholar with "a slight flaw in [his] character", and Lu Yu, usually called Number Ten Ox, his sidekick and the story's narrator. Number Ten Ox is strong, trusting, and pure of heart; Master Li once sold an emperor shares in a mustard mine, because "I was trying to win a bet concerning the intelligence of emperors." Number Ten Ox comes from a village in which the children have been struck by a mysterious illness. He recruits Master Li to find the cure and comes along to provide muscle. They seek a mysterious Great Root of Power, which may be a form of ginseng. Of course, nothing turns out to be as simple as it seems; great wrongs must be avenged and lovers separated must be reunited, from the most humble to the highest. And even in the midst of cosmic glory, Pawnbroker Fang and Ma the Grub are picking the pockets of their own lynch mob, who are frozen in awe and wonder.

Ohmigosh, how did I let this book collect on my bookshelf for so long? I feel so lucky that there are two sequels available out there for this one! Thank you so much, Zibilee, for nudging me to take it with me to India! It was a perfect foil to read during the day (while waiting for someone or other) before steeping myself in the violence of the Mahabharata at night.

I don't think I've read such a completely fun book in a very, very long time. Bridge of Birds is one of those amazing fantasy novels; while you read it, it seems so simple and light a story, and then when you finish, you realize how wonderfully the author captured the world in his imagination. Hughart is hilarious- truly, deeply so. He writes with a completely unself-conscious air of fun, and it is magnificent. He also introduces us to several memorable characters, some heroic and good, and others despicable and violent. All wonderfully written. I really haven't read much "Eastern" fantasy before, my only notable venture being Across the Nightingale Floor, by Lian Hearn. But Hughart doesn't bog his story down with honor or ancestors or decrees or anything of the sort- he just writes a really good story. After reading this one, I'm excited to see Guy Gavriel Kay's next offering, which is also said to be based in Ancient China. Though I am a big GGK fan, I don't think his novel will be as light and entertaining as Hughart's. I can't say enough good things about this book. The banter is so witty, the characters so heart-warming, and the plot so engaging that I really couldn't put it down. Highly recommended!
Musings by Aarti at 4:05 PM