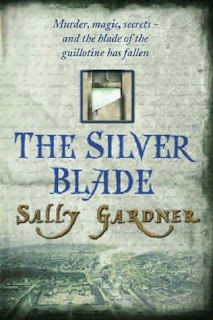 Product Description
A stirring tale of magic and revolution- fans of The Red Necklace won't want to miss it.

The year is 1794. With his beloved Sido safely in England and the Reign of Terror at its height, mysterious Yann returns to revolutionary France to smuggle out aristocratic refugees who will otherwise face the guillotine. But while the two are apart, Yann’s Gypsy origins prejudice SidoÂ’s guardian against their marriage, thwarting their longed-for reunion. When Sido is kidnapped under strange circumstances, however, Yann must use all his strength and courage to outwit the evil Count Kalliovski, rescue Sido, and help save all of France.
As she did in The Red Necklace and the award-winning I, Coriander, Sally Gardner spins an epic tale that combines a vivid sense of history, characters full of Dickensian drama and fascination, and a sizzling adventure with touches of magic and romance.
I appear to be on a serious young adult fantasy kick recently. Well, recently being the past three days, over which time I have finished three books. Good thing they have all been pretty quick reads, so it doesn't seem too much like I have no social life! Seriously, I have plans every other night this week...

The Silver Blade is the sequel (and I think there may only be two books in the series because the story wraps up pretty neatly here) to Sally Gardner's The Red Necklace, which I reviewed here. It is historical fantasy set during the French Revolution. It centers mainly around Yann, a gypsy with the power to move objects and read people's minds and his lady love Sido, who has no magical power to do anything (except be beautiful- more on that later).

The plot in this book was darker and more supernatural than its predecessor. The villain, Count Kalliovsky (sidenote: why not Comte? Every other aristocratic title in this book is done in the French form, so why is there a count instead of a Comte? And Kalliovsky? That isn't even a French name. I think the author was trying to make it seem like he was from Transylvania. But I digress.), is truly evil and just... disturbing. In The Red Necklace, I thought he was more interesting as a character, but in this one, there was really nothing even like that to redeem him. You always knew what he would do because he would do the cruelest thing possible. New characters, on the villain side, were also introduced in this book, but they also had no depth. They were just evil, pure and simple.

And then, on the glorious side of light and goodness, Yann and Sido. I really liked Yann in The Red Necklace. He was a boy who had his head on straight and knew what he was about. He still is, in this book, except that he takes these really annoying turns of being a lovestruck mooncalf, bemoaning the loss of his soul mate Sido, who is off in London. And Sido is even worse than he is because she doesn't even really do anything in the book at all, except be in love with Yann. If she had a more active role, then it may have been easier to take. But she spends very little time doing anything except writing letters to her boyfriend. It is not often that a book can make me physically roll my eyes, but this book managed. This is probably why love letters are best kept private; they have a very different effect on anyone who is not the intended audience. Yann and Sido literally go through the story making several people in the book fall in love with them (oh, woe are them) and managing to remain steadfast and pure to their True Loves. Sigh. It's a well-worn path of a story, really. And while I like the dashing action and the French Revolution setting, this book just didn't catch me the way its predecessor did.

Overall, though, I'd recommend the series. The good parts outweigh the bad, and maybe other people won't be quite so annoyed by the moping as I as.

Another small part of this book which annoyed me (and it annoys me about so many books that take place in any historical period) is the belief that everyone in "Society" is dull and vain and empty-headed. I say it's a small part, but it's something that greatly annoys me.

How is this possibly the case? It seems like every book that takes place in English Society between the years of about 1600 to 1900 does this. The Red Necklace and The Silver Blade, between themselves, do it on both the male and female side. So no one in London in the 1790s was interesting at all.

The formula is pretty basic. The book will feature a Feisty Young Lady or a Charming Young Man. We will know that the lady is feisty, or that the young man is charming, because the character will make it clear to us in some way that they Do Not Belong in society. Everyone around them is foppish and boring and only interested in clothing or gossip. Feisty Young Lady/Charming Young Man is the only person in all of London who is not a completely dull waste of life. And the poor dear is miserable about it. Honestly, how rude and egotistical is this premise?

It implies, fundamentally, that anyone who had money or "family" in England (or any European country, I assume) for about 300 years was ignorant and foppish. This is very much at odds with the fact that, for those years, the rich and landed were the only ones who could afford an education, and were the ones driving thought, socially and politically. They read. They wrote. They conversed. I cannot believe that a person versed in all the Greek classics, mastered in a musical instrument, hostess of political salons, and a great many other things besides, would be boring. She would not only discuss her ballgowns. The assumption that all these people with money and nice clothes and a penchant for a big party who attended balls were universally shallow and dandy-like is just annoying. Somewhere in that huge mass of people, someone had to be worth of conversation.

And honestly, if the Feisty Young Lady/Charming Young Man is that out of place in society, well... maybe the character just isn't making any effort to get along with people. After all, it's a two-way street. If you find everyone around you stiff and dull, then they are likely to find you rude and stand-offish. Not the way to win friends.

[Aarti steps off soapbox]
Musings by Aarti at 10:56 PM