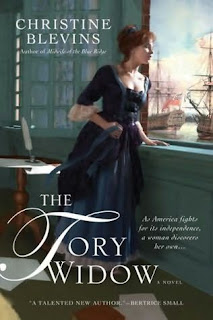 On a bright May day in New York City, Anne Peabody receives an unexpected kiss from a stranger. Bringing news of the repeal of the Stamp Act, Jack Hampton, a member of the Sons of Liberty, abruptly sweeps Anne into his arms, kisses her—and then leaves her to her fate of an arranged marriage…

1775: Nearly ten years have passed and Anne, now the Widow Merrick, continues her late husband’s business printing Tory propaganda, not because she believes in the cause, but because she needs the money to survive. When her shop is ransacked by the Sons of Liberty, Anne once again comes face to face with Jack and finds herself drawn to the ardent patriot and his rebel cause.

As shots ring out at Lexington and war erupts, Anne is faced with a life-altering decision: sit back and watch her world torn apart, or stand and fight for both her country’s independence and her own.

Meh. The Tory Widow is a historical novel set in Revolution-era New York- it sounded right up my alley when I saw it as an offering for LibraryThing's Early Reviewers program. However, in my opinion, it falls pretty flat. The elements of a good story are there- a war for liberty, espionage, daring characters, romance, independent women... but they just didn't come together for me. I don't think this was the fault of the plot, really. The storyline wasn't anything thoroughly original, but it certainly had enough interesting twists to keep a reader's attention. It would be very depressing for a published author to think of a plotline involving the Sons of Liberty and somehow manage to make it boring.

So this book's downfall, for me, was its characters. I just didn't like them much. Mostly because they seemed so very inconsistent. All of them seemed inconsistent to me, but the two main characters (Annie and Jack) seemed as though they suffered from schizophrenia for the first 200 pages or so. Here's a recap:

Jack kisses Annie, a complete stranger, on her wedding day (as she marries a much older gentleman).

Jack and his Sons of Liberty crew come to Annie's print shop and ruin her press, as she is a suspected Loyalist. Jack, additionally, pours a pissbucket over her treasured collection of books (after he tells her that he also loves reading. Anyone who can love reading and then ruins rare books in such a callous manner should not be trusted.)

Annie stupidly walks down a deserted alley, where she is cornered by thugs and then saved by Jack (more on this plot device later).

Jack goes to a whorehouse.

Annie finds out, has a cry, and breaks ties with Jack.

Annie spends about ten minutes without Jack and realizes that she's in love with him. Even though he threw stale piss on her books, stole her printing press, and then cheated on her with a prostitute.

I won't even get into it from Jack's point of view. Believe me, the story makes no more sense from his perspective. And the secondary characters are just as sloppily written. There is just very little consistency, and I never had any reason to believe the emotions expressed were genuine.

Also, I do not understand why the whole, "I was an idiot and went into a seedy area where I was attacked by thugs who were after my Virtue, and then a rugged man whom I previously despised came and saved me from my situation and I realized that he really was a gentleman who was willing to save a Damsel in Distress, and I fell for him because he did not take advantage of my stupidity or steal my Virtue."

I get very angry at these scenes as they really seem to imply that women are stupid (though, granted, the types that fall into those types of situations generally are), and they also seem to make light of the entire rape scenario. How often is a good-hearted gentleman likely to find you at knifepoint while a drunkard tries to take advantage of you?! Not very often at all. And yet, in books... it happens all the time. And somehow, after that scene, the man doing the saving is made out to be some sort of hero. Yes, it's very nice of a man to help someone else in a time of need, but that does not necessarily make him a hero.

This scene, and other smaller ones, really bothered me and lessened my enjoyment of the book. Couple that with the inconsistencies in character, and I don't think I'll be looking for much else by this author.
Musings by Aarti at 4:24 PM