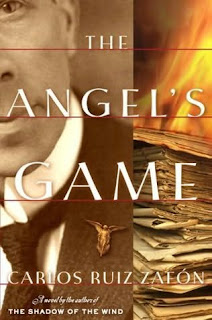 Favorite Line: He was a small man who looked as if the world had wrinkled him up to such a degree that it had taken everything from him except his smile and the pleasure of being able to clean that bit of floor as if it were the Sistine Chapel.

This review is based on an advanced reader's copy. The book will be available in the US on June 16, 2009.

From Booklist
Zafón’s international best-seller, The Shadow of the Wind (2004), a book-steeped fantasia set in post–World War II Barcelona, introduced us to Daniel Sempere and the Cemetery of Forgotten Books, a secret library where books are guarded against oblivion. The Angel’s Game, a prequel of sorts set in the 1920s, features another Daniel—Daniel Martín [AARTI NOTE: This is false - his name is David]—an orphan who learns the writing trade at a newspaper, then finds success with a pseudonymous series of gothic potboilers called City of the Damned. After his lone literary effort falls flat, his health failing, he accepts a commission from a mysterious publisher, Andreas Corelli, to write an audacious book for an astronomical sum—but soon has reason to suspect that his handshake deal is worse than any contract he has signed. Once again, Zafón proves himself a magician, vividly invoking bygone Barcelona while unscrolling a byzantine plot at breakneck pace. The crumbling houses, supernatural secrets, and emotionally responsive weather might be a bit much for some readers to digest, though for others it will be a feast. But what would have kept The Angel’s Game itself from being someday consigned to the Cemetery of Forgotten Books would have been a stronger connection between storybook evil and the real-life kind. While Zafón portrays Martín as a successful seller of entertainments who longs to be a serious scribe, his own unfinished thoughts about religion and totalitarianism show his priorities. Pity, because he seems the perfect author to help prove that serious stuff can also be entertaining as hell.

One of the best perks of being involved in the online literary community is the ability to sometimes get my hands on books before they are published. Sometimes, I can get my hands on books by authors that I really, really, really like. This is one of those times. If you have ever once had a conversation about books with me, you have probably heard me gushing like a teeny-bopper at a boy band concert about Carlos Ruiz-Zafon's novel The Shadow of the Wind. It is one of my all-time favorite books, and sooner or later, I tell everyone I know to read it. In fact, if you are reading this blog and you haven't yet read that book... get on it.

So when I saw that Ruiz-Zafon's highly anticipated new offering in the Cemetery of Forgotten Books series (honestly- how can one not love a series of novels based around a place called the Cemetery of Forgotten Books?!) was coming out and that I had a chance at receiving a review copy, I couldn't send an e-mail fast enough. And, happily, the book arrived very quickly at my door and I have been reading it ever since.

I opened this book expecting a novel similar to The Shadow of the Wind. That was silly of me, and The Angel's Game is very different. The story is much darker and uses many more supernatural elements. There are sections that you read and then think you must have dreamed as they are barely ever alluded to again. There is a great deal of physical violence and disturbing psychological drama. It is an angry book, full of theological debates and the hard truth that sometimes, things just don't end perfectly. There are so many characters- and some characters with many personae- that it is easy to get confused. In fact, I must admit, I'm not entirely sure exactly what happened in the last fifty pages or so. I feel like the writing just kept going and when you thought things were being resolved, it ended up they were not, and then you were right back in the midst of the teeming, complicated plot once more.

But wow, what a writer.

From the first page, you are once again immersed in Ruiz-Zafon's writing style. He is so atmospheric. The Barcelona I visited some years ago, that was light and bright and full of fun architecture, is here transformed into a Gothic vision of darkness and depression and cruelty. Ruiz-Zafon is masterful at creating a sense of place in his books. He knows his way around Barcelona with his eyes closed, and the city is just as much a character in the book as anyone else.

I did not enjoy The Angel's Game as much as I did The Shadow of the Wind. I think Ruiz-Zafon expected this. It has been seven years since The Shadow of the Wind was published, and he has been promising four books in the series. In an interview, he compared the two books:
One of the fun things about this process was it allowed me to give each book a different personality. Thus, if Shadow of the Wind is the nice, good girl in the family, The Angel’s Game would be the wicked gothic stepsister.

A very apt description. The Angel's Game is in a different vein entirely than The Shadow of the Wind, but the same themes (and at least two characters) resonate in both. Most importantly, both novels detail the power that books can have in our lives, the voids they fill within us, and the myriad methods by which they can mold us- for better or for worse.
Musings by Aarti at 9:57 PM