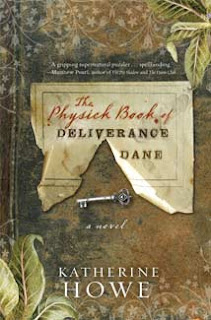 
A spellbinding, beautifully written novel that moves between contemporary times and one of the most fascinating and disturbing periods in American history-the Salem witch trials.
Harvard graduate student Connie Goodwin needs to spend her summer doing research for her doctoral dissertation. But when her mother asks her to handle the sale of Connie's grandmother's abandoned home near Salem, she can't refuse. As she is drawn deeper into the mysteries of the family house, Connie discovers an ancient key within a seventeenth-century Bible. The key contains a yellowing fragment of parchment with a name written upon it: Deliverance Dane. This discovery launches Connie on a quest--to find out who this woman was and to unearth a rare artifact of singular power: a physick book, its pages a secret repository for lost knowledge.
As the pieces of Deliverance's harrowing story begin to fall into place, Connie is haunted by visions of the long-ago witch trials, and she begins to fear that she is more tied to Salem's dark past then she could have ever imagined.
Written with astonishing conviction and grace, The Physick Book of Deliverance Dane travels seamlessly between the witch trials of the 1690s and a modern woman's story of mystery, intrigue, and revelation.

Based on the book flap on this ARC, there will be a blitz of advertising for this book when it comes up. There is a planned teaser trailer, a Facebook campaign, a "viral widget," (what is that?!) and all sorts of other stuff. I have a feeling this is to be the next The Historian. I did not particularly care for The Historian, and I have the same sorts of issues with Deliverance Dane. The author has done a lot of research into the Salem witch trials, and she certainly tries to put it all into the book. (Though not to the extent that Elizabeth Kostova drops in long passages of vampiric research into The Historian.) She also has a very bizarre way of terming things to be "New England" or "Yankee" culture. I have not experienced this before, and I found it odd that seemingly innocuous occurrences were described as being a New England propensity for thrift or something of the like. Maybe this is normal for people from the East Coast- I don't know :-)

Another feature that irked me was Howe's random descriptive passages. I like authors writing lush books using lush language. But I feel that sometimes, it can seem forced. Saying that a voice "floats in sans serif font" seems forced to me.

Personally, I feel this book is going to get really good reviews due to all the hype surrounding it. And I'm not saying that it wasn't good- it was entertaining and fun to read, though I think it could do with some more editing.

The premise of the book is intriguing on its own- a novel written from the assumption that the accused witches of Salem were truly witches. Interestingly enough, this is not a take that I have seen before (Has anyone elseread books with this premise? Good ones?). And the historical parts are compelling. In fact, I much preferred the historical interludes to the modern-day ones. Modern-day being 1991. I'm not entirely sure why Howe decided to set her story in 1991 instead of in 2009; that's a question I'd like to ask her.

And generally, I think if you enjoyed The Historian, you will enjoy The Physick Book of Deliverance Dane. Also, I think anyone who has the tiniest inkling of interest in American colonial history will be unable to withstand the plethora of marketing around this book. So go for it, and enjoy. And for those of you East Coasters, please let me know if you think the book embues that "New England" personality.
Musings by Aarti at 6:20 PM