Review: The Enchantress of Florence 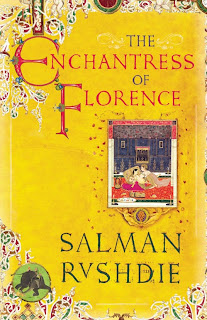 Title: The Enchantress of Florence

Favorite Line: The emperor was not content with being. He was striving to become.

From Publishers Weekly
Starred Review. Renaissance Florence's artistic zenith and Mughal India's cultural summit—reached the following century, at Emperor Akbar's court in Sikri—are the twin beacons of Rushdie's ingenious latest, a dense but sparkling return to form. The connecting link between the two cities and epochs is the magically beautiful hidden princess, Qara Köz, so gorgeous that her uncovered face makes battle-hardened warriors drop to their knees. Her story underlies the book's circuitous journey.A mysterious yellow-haired man in a multicolored coat steps off a rented bullock cart and walks into 16th-century Sikri: he speaks excellent Persian, has a stock of conjurer's tricks and claims to be Akbar's uncle. He carries with him a letter from Queen Elizabeth I, which he translates for Akbar with vast incorrectness. But it is the story of Akbar's great-aunt, Qara Köz, that the man (her putative son) has come to the court to tell. The tale dates to the time of Akbar's grandfather, Babar (Qara Köz's brother), and it involves her relationship with the Persian Shah. In the Shah's employ is Janissary general Nino Argalia, an Italian convert to Islam, whose own story takes the narrative to Renaissance Florence. Rushdie eventually presents an extended portrait of Florence through the eyes of Niccolò Machiavelli and Ago Vespucci, cousin of the more famous Amerigo. Rushdie's portrayal of Florence pales in comparison with his depiction of Mughal court society, but it brings Rushdie to his real fascination here: the multitudinous, capillary connections between East and West, a secret history of interchanges that's disguised by standard histories in which West discovers East.Along the novel's roundabout way, Qara Köz does seem more alive as a sexual obsession in the tales swapped by various men than as her own person. Genial Akbar, however, emerges as the most fascinating character in the book. Chuang Tzu tells of a man who dreams of being a butterfly and, on waking up, wonders whether he is now a butterfly dreaming he is a man. In Rushdie's version of the West and East, the two cultures take on a similar blended polarity in Akbar as he listens to the tales. Each culture becomes the dream of the other.

I really like the idea of stories told within stories, layered like so many flower petals to create a total that is more than the sum of its parts. The Enchantress of Florence is one of those- the narrator telling the story of a traveler to Sikri. The traveler telling the story he heard from his mother, part of which is recited by a human "memory palace," which was told to her by one of the main characters in the story. And so on and so forth.

To be perfectly honest, I'm not really sure what the theme of the novel really is. The power of words to transform? The ties that bind? The bewitching and sometimes very dangerous powers of a breathtakingly beautiful woman? The thin line between dreams and reality? The even thinner line between legend and history? It could be any and all or none of those (which is really quite a bit for a book that isn't really all that long).

What really captured me in this novel was the writing. Some books are read for the plot, some for the characters, and some very few for the writing. For me, The Enchantress of Florence was a delight to be savored- the way the words fit together was magnificent. It didn't matter to me, on finishing it, that several of the stories ends had been left loose. I was not ready for it to end where it did, but wow- what an ending.

Rushdie is an undisputed genius. He has won The Booker Prize and his novels enraged some Muslim higher-ups so much that they issued a fatwa on him, which has since been removed. His books obviously have far-reaching impact and they are not written just to tell a good story. But The Enchantress of Florence is a good story. I don't think I followed all its themes and messages in my first reading- I will have to read it again. For example, the book abounds with female characters, from prostitutes to queens to mistresses to wives to the most intriguing "memory palace." But none of the women relates her story- all the stories are related through men, either in words or in pictures. In fact, the only woman in the book who actually tells a story is the memory palace, and she only recites the history, word for word, told to her by a man. (How's that for symbolism?) Much as the story revolves around women, from the character(s) alluded to in the title on down, it is a book about men.

I could probably write an essay on the role of women in the novel, but the stand-out character is the Emperor Akbar, a wonderfully conflicted ruler of the world who balances the idealism of "I wish everyone would just get along" with the pragmatism of "Don't mess with me; I'm the king." He is portrayed as a dreamer with very 21st century ideas. Perhaps these were unfairly placed on his shoulders by Rushdie, writing a novel for a 21st century audience. It's quite possible, but for me, it worked most of the time. Akbar is a man lonely at the top, desperately looking for a friend. So desperate for someone to share his deepest thoughts with, in fact, that he creates a wife for himself who exists through the sheer force of his belief.

I found this book a delight to read- on the more "superficial" level of enjoying the story, and on the deeper levels of wrestling with the themes and ideas presented in it. If anyone else has read it and would like to discuss it, please let me know! I'd love to take part.
Musings by Aarti at 4:25 AM