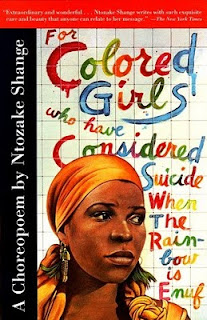 When a book title is as long and descriptive as this one is, I feel no need to be creative in my post titles.

For Colored Girls Who Have Considered Suicide When the Rainbow is Enuf is the second book by Ntozake Shange that I have read (both via audiobook).  The first was Sassafrass, Cypress, and Indigo.  Both are excellent.  For Colored Girls started as a series of poems and then was turned into a stage play.  It's also been made into a movie.  I am not sure how to describe it, so I'll share the book description here, though it is not particularly descriptive:

In her introduction to the book (which is also brilliant), Shange shares the story of how the work evolved.  She describes it as a "choreopoem," in which many individual pieces come together to form one statement.  She also talks about how the work has resonated with so many people across cultural and societal lines.  It's not only performed by African-American women.  It was also adapted by white women in Appalachia to talk about the class system.  It was done in Brazil.  It was done with an all-male cast.  It's been adapted in so many ways, by so many people, and it was so moving to hear Shange describe how amazing it is to have created a work that touches people so deeply.  I also loved, loved, loved Shange's thoughts on feminism and how she wrote the work for women.  When men decry it as being anti-Black male, they are turning something very personal to women to something about themselves, which is not what Shange intended or wanted at all.  It was so enlightening to read and I have a serious literary girl-crush on Shange.

There is no real plot to for colored girls.  It doesn't need one.  It's a series of poems that describe such a range of situations and emotions and experiences that I can't imagine reading this only one time.  It's the sort of work you read and you just know if you read it again in a few years, you'll get even more out of it, or what will resonate with you then will be so completely different than what you got out of it this time.  I'm so disappointed that I didn't read this book until I was 30.  I feel like 20 year old me would have gotten a lot out of it, too.

I did this as an audiobook, and it was amazing.  I surprisingly really enjoyed hearing all the stage directions and notes in the play.  I also enjoyed listening to the poems.  As I found out when listening to Make Lemonade, it is less intimidating to approach long-form poetry through audiobook than through written form.  That said, I do think this is a book I will want to read physically.  I want to savor the words and linger over phrases, dogear the pages and copy down quotes.  It is a book that I am excited to read again, and I hope that all of you who haven't read it yet will pick it up - I am sure it will resonate with you just as it did with me.
Musings by Aarti at 7:30 AM