Woman Who's Dead Inside Messes Up Lotsa Lives 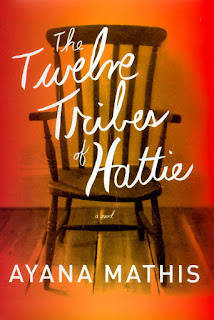 The Twelve Tribes of Hattie has received a lot of press since being chosen for Oprah's Book Club.  I generally don't love Oprah's picks because they are often depressing.  This one was no exception.  Why does Oprah pick so many depressing books when she's all about bringing people up and giving them hope?!

Ayana Mathis' debut novel begins with a teenaged Hattie trying desperately to save the lives of her infant twins, both of whom are suffering from pneumonia.  She fails, and this has repercussions on her life and many, many others over the years.  The story is narrated by multiple narrators from the 1920s to 1980, all of whom are intimately associated with Hattie - her sister, her husband, her children.

I listened to this book via audiobook, and I think that was a big mistake.  I got very confused with all the narrators and how they were related to Hattie and to each other.  The narration would jump around a lot and I had trouble understanding the time line.  I had no idea of the birth order of Hattie's children and how often they saw each other, or how differently they had grown up.  I have a feeling that this may have been easier to follow in reading the book physically, especially if there was a family tree of some sort involved, but I was very, very lost.

I also just didn't think I knew Hattie well enough to understand her impact on everyone around her.  She was an unhappy woman who infected other people with her unhappiness, but she wasn't a compelling enough or strong enough character to carry this burden through the story.  And while the glimpses we got into the lives of the people around her were interesting, I was always very happy to leave them and relieved to move onto someone else.  But the next person would be just as depressing!  And while I am sure that having an emotionally unavailable mother made their lives hard, we are given hardly any insight as to how all of the narrators became so damaged themselves.  It can't all have been Hattie's fault.  But no insights there.

My next audiobook is back to Flavia and her mysteries, so I think it will be a bit more fun and peppy than this one was - I think I need it after this!
Musings by Aarti at 7:30 AM