Musings: Behind the Beautiful Forevers 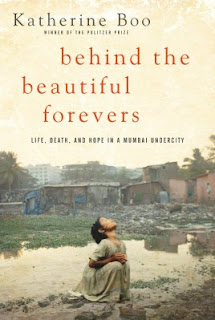 Katherine Boo's Behind the Beautiful Forevers chronicles life in Annawadi, one of Mumbai's slums situated close to the airport and all the five-star hotels that surround it.  She follows men and women of different ages, religions, beliefs, and goals to present a very nuanced and complicated story.

I said in my review of A Suitable Boy that I loved the book because it showed both the beauty and the corruption that co-exist in India.  Boo's book does the same, but focuses on a much lower class of society.  While Seth focused on the slow sunset of the Raj's ruling class, Boo tells her story (non-fiction, by the way) by focusing on people that are on the cusp of living in the middle class.  They are so close to stability, if only.  If only luck goes their way, the government officials don't ask for too much money, the police don't take away their livelihoods, and their neighbors don't turn them in on trumped-up charges born of jealousy and spite.

But this is a lot to ask for in a city (and state and country) that deals in corruption at every level.  The inevitable consequence is that no one trusts anyone else, and instead of the slum dwellers supporting each other and cheering on successes as a community, each family turns on the others in a desperate attempt to leave the slum and gain a leg up in life.  As Boo says so accurately:


In Annawadi, fortunes derived not just from what people did, or how well they did it, but from the accidents and catastrophes they avoided. A decent life was the train that hadn’t hit you, the slumlord you hadn’t offended, the malaria you hadn’t caught.

The very arbitrariness of life is what makes this book so gripping.  The crux of the book centers around Zehrunisa, a woman who wants to show that her family has done well in the world by remodeling her home.  This is a typical event in most people's lives.  But while putting in kitchen shelves, Zehrunisa's crippled neighbor, Fatima, accuses them of ruining her (adjoining) home.  The situation escalates, with horrible things said on both sides.  The climax is a bizarre turn of events which leaves Fatima with terrible burns all over her body, spewing lies and accusing Zehrunisa's innocent young son of trying to kill her.  Zehrunisa's son goes to jail.  And as the family attempts to navigate India's complicated legal system, readers are given a truly disturbing glimpse into the many, many levels of corruption that people must deal with every day.

I suppose one might consider this book to be a sort of literary Slumdog Millionaire.  And I must admit that after reading this book and watching the excellent PBS series Half the Sky, I have come to realize just how prolific prostitution really is, particularly women prostituting themselves in the hopes of gaining some sort of power or favor from someone higher up.  I also learned just how often people commit suicide out of hopelessness at their situations, often because they cannot find the money to pay back loan sharks.

Behind the Beautiful Forevers' greatest strength is also, in my view, its greatest weakness.  Katherine Boo focuses entirely on two or three families and their (often futile) attempts to do better for themselves and their families.  Other characters are featured only briefly - the old man desperate for donations so that he can have surgery, the police officers who claim all Annawadi murders are actually deaths by illness, the lawyers who try to extort money from their clients, and so many, many others.  As Paul Beckett says in his review:


In all, we are left with a book that gives readers genuine and revelatory insights into the lives of some people who live at the bottom of the urban Indian heap. But as for a cogent, expansive explanation of what put them there, what keeps them there, what occasionally lifts them out of there and the broader trends and events that shape their lives, we are left wanting.

I wouldn't say that this book is incomplete by any means.  But just as seeing a cell under a microscope does not give you even a hint of the complexity of a human body, or looking at one tile of a mosaic doesn't prepare you for the detail of the masterpiece, this book gives you a wonderfully written, microscopic look at one of Mumbai's overlooked communities.  But it doesn't give you the full story.

Is it unfair to ask for the full story?  Probably.  There's so much petty crime, creating an avalanche effect that permeates everything.  How can one person grasp all of that in just one book?  It's impossible.  And so instead, Katherine Boo provides us with stories that detail the impact of this corruption, on the people who have the least opportunity to fight back.  And that makes the entire process so much more human and terrifying.
Musings by Aarti at 7:30 AM