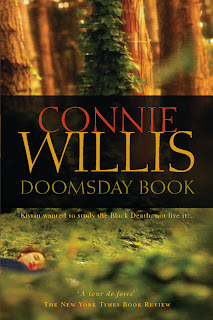 Marg and I read Connie Willis' To Say Nothing of the Dog together and loved it.  We agreed to do a buddy read of Willis' more famous novel, Doomsday Book, as quickly as possible.

And now here we are with the discussion, just a little bit later than we had planned.

Doomsday Book is a time travel novel that takes place in the mid-21st century and the mid-14th century.  Kivrin, the main character, is a scholar of the Middle Ages and wants desperately to go back in time and experience it for herself.  So she does, against everyone's better judgment, and ends up in a small English town outside Oxford and tries to assimilate herself into life in the early 1300s after getting violently ill.

Meanwhile, in the 21st century, there has been a horrible outbreak of an unknown disease and everyone is under quarantine.  Willis uses these parallel story lines to show just how much has changed and how much has stayed the same over seven centuries of history, and just how devastating a pandemic can be, if you don't know how to treat it.

Below is the second half of our discussion.  The first half is over at The Adventures of an Intrepid Reader.  Go check it out and then come back here - I promise the post won't have disappeared in the meantime :-)

And thanks to Marg for reading this with me!

Marg:  One of the other major characters was the priest. I found the relationship with the priest to be quite unsettling at times. I wasn’t sure for whether he was a friend or foe for a lot of the book. What did you think of him?

Aarti:  I ended up really liking the priest.  He seemed to be trying his hardest to keep faith and help people even when everything was falling apart.

Marg:  He certainly found himself in a very trying position with the matriarch of the house having decided that he wasn’t a good enough priest! She would have been enough to try the patient of any man!

Aarti:  So true!  I suppose that was Willis’ way of showing the latent classism that existed at the time.  It seems to be present in so many books about the Middle Ages - or really, any age except the modern one.

One aspect of this book I really liked was the juxtaposition of the plague in the 1300s vs. the infection in the 21st century.  While not as many people died in the 21st century, there was still the sense of bewilderment and helplessness that was so prevalent in the 14th century.

Marg:  We are definitely susceptible to panic in relation to viruses. We saw that a few years ago with the SARS virus and bird flu. Yes, technologically we can react quicker with vaccines and with different levels in care and so many less people die but there is a still a human cost for such outbreaks and that was played out really well on the page.

Aarti:  One thing that always upsets me in books but that is very true to life is when people die so abruptly and you have no idea that it’s coming and when you think back on your last conversation, you wish you could have said and done so many other things.  I think Willis captured this well.

Marg:  Another aspect that I thought was very well done was the idea that Kivrin had done so much preparation for her trip back to medieval times but when she got there life and language was actually pretty different. We do kind of blindly accept when historians say this is what life was like, but it is their interpretation of the archeological finds and the literature and historical recordings of the time, so it does make sense that at times the conclusions that are gained might be just a little bit off. After all, there are people who live now who have very different lifestyles so a one size fits all type of generalisation about life in the 21st century wouldn’t necessarily work all that well now either.

Aarti:  Yes, I liked that, too!  I’ve always wondered how linguists can figure things like that out, and it was interesting to see how Kivrin had to adapt to things that were completely different than what she was expecting.  I wish we had more of that - more of learning about the everyday aspects of life and how people lived then, rather than the never-ending desperation to find the drop site.  It seemed like Kivrin tried so hard to get to the Middle Ages, and then when she got there, she was just desperate to get back, so we missed a lot of what was really going on then.

Marg:  It seems kind of weird to say it given that we are talking a book that is set in the future and features relatively routine time travel, but I did find this book a bit dated in some ways. it’s not surprising given the book was originally written in 1992 and our technology has moved forward a lot but it would be hard to imagine a future life without some variation on cell phone technology for example.

Aarti:  Yes!  That was something that struck me, too - that people were so completely inaccessible in the 21st century, when that would just not really be an option today.  There was video-conferencing but no thought of cellular phones.  I agree - that detail in and of itself made the book seem quite dated.  Especially as I’m pretty sure cell phones existed even in 1992.

Marg:  I am trying to think when I got my first cell phone and it probably wasn’t for another few years after that so maybe it was only early adopters that had them and it wasn’t really obvious how huge a part they were going to play in future life! I think the inaccessibility issue was quite realistic though. You only have to look at big disasters like 9/11 and the bushfires, hurricanes and other natural disasters to know that the telecommunications systems quite often are overloaded and therefore collapse.

Aarti:  Yes, that’s been made very clear with Hurricane Sandy in very recent history, too.  We are so dependent on technology, so when it fails, we are at a complete loss.

Marg:  I don’t know about you, but I enjoyed To Say Nothing of the Dog much more than I enjoyed this book and I am so glad that I read that one before I read this one. If I hadn’t I am not sure if I would have continued on with the books. I have Blackout sitting on my desk at the moment waiting to read. Maybe we can do a joint review again sometime in the next 2 years! <grin>

Aarti:  Haha, well, if Colin is in that book, then I am far more motivated to read it than I would be otherwise!  He’s such a riot, I’d really like to see what he’s like grown up :-)