A New Edition of A Monster Calls 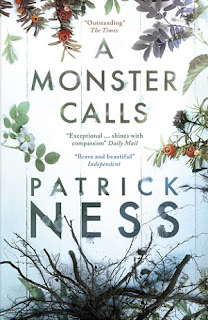 A few months ago, I read and reviewed Patrick Ness' A Monster Calls, a beautifully illustrated young adult novel about a boy dealing with his mother's terminal illness.  Some time after that, I received an email from a senior press officer at Walker Books, the publisher behind A Monster Calls.  He said that the book is being released in a new edition that specifically targets adults so that they too can be moved by this beautiful story.

I am of two minds about this.  I love that the book is gaining so much recognition and that the publisher understands that it has a universal appeal.  The story is heart-breaking on levels that adults will understand just as much as children, and I strongly believe that the book will offer solace to adults, help them to forgive themselves for any wrongs they may have committed.

But the illustrations are really amazing.  They capture the spirit of the book so wonderfully, with the black and white pen drawings and this huge, looming monster and the shadows and all the rest.  They add so much to the story, really complete it.

But apparently, adults aren't interested in illustrated volumes.  They think they are too childish.

I find this a little hypocritical on the part of adults, mostly because all of them are only too happy to pick up books that are marked young adult and do not have illustrations - Twilight, The Hunger Games, etc., etc.  But they decide to draw the line at something illustrated?  As though A Monster Calls is more of a children's book than Twilight is.

Sigh.  People can be so frustrating sometimes.

But honestly, if removing the illustrations and making the book an easy-to-carry-sized paperback is what it takes to get this book into more people's hands and to encourage more people to pick the book up, read the first page, and become utterly absorbed in the story, then that's fine with me.  Maybe those people will read this version, realize that there is another version with illustrations, and then read that one, too.  That would be ideal.

Whichever edition of this book appeals to you more, I highly recommend you get your hands on it.  It's absolutely amazing.

Note:  I received a copy of this book for free to review.
Musings by Aarti at 7:30 AM