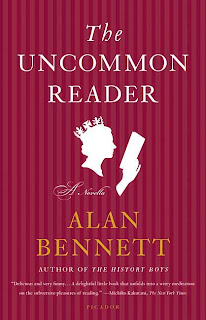 Alan Bennett's novella The Uncommon Reader is one that I've had on my wish list for some time, and I was very happy to see that it is one of the audiobooks available for digital download from the library.  I am really getting much further along in both my mental and physical wish list of books to read by utilizing the library so much these days!  Particularly in the audiobook department- I feel so efficient!

The Uncommon Reader is a novella about Queen Elizabeth becoming an avid reader.  One fateful day, her beloved dogs start barking up a storm at a bookmobile and the Queen feels that she must borrow a book to make up for the disturbance.  She makes conversation with the other borrower, Norman, and chooses an Ivy Compton-Burnett novel for herself.  She finishes it and chooses another the next week.  And then another, and another, and another, until she finds herself with an insatiable thirst for reading.  She carries paperbacks in her handbags, reads while waving from the motorcades, hurries through official functions, and asks her subjects what they're reading.

In a regular person, this would not be a big deal.  But in a queen, it is.  What does it mean when a queen starts to read?  What is she implying about the state of the country?  What is she reading?  Does it have symbolic significance?

As a queen, Elizabeth does not have hobbies.  Choosing to read implies that the queen is choosing not to enjoy art or music or running or anything else - it expresses favoritism.  So does choosing one author over another.  And should she be allowed to read just for enjoyment, or should she be reading to make a statement?  One of her advisors recommends that she read books by minorities to gain popularity points.  The queen says that she is reading a book by Vikram Seth (so am I!), but that she is not reading it because he is a minority; she's reading it because she wants to read Vikram Seth.

The queen starts to neglect her duties so that she can read, begins to think more about other people and their places in the world as they relate to her.  Interestingly, she doesn't enjoy Jane Austen - the idea of a man and woman having so many hurdles to overcome just due to small differences in income or status doesn't seem real to her because the differences that exist between her and other people are so much wider.

This book is a gentle satire, but it really touches on so much of the magic that comes with being a reader.  The queen's perspective changes so drastically and has so many unforeseen consequences that one can't help but empathize with her position.  It was a lovely read, and I'm glad I finally got around to it.