A and Z March Through the Middle: Middlemarch Book IV 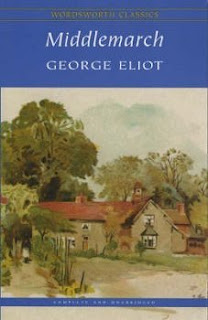 Zibilee and I are here once again, discussing Book IV of George Eliot's epic novel Middlemarch.  We're halfway there!

For those of you who may not know, the lovely and fabulous and eloquent Zibilee and I are reading George Eliot's Middlemarch together over the next several weeks (possibly months) in a fairly meandering and highly unscheduled manner.  Basically, our plan is to read one book (there are eight books that comprise the novel) and then discuss it and analyze it into submission so that our weary modern minds can understand it :-)

The first half of our Part IV discussion is here, and the second half is at Zibilee's blog, Raging Bibliomania.  We chat about farcical funerals, the issues of power and control, poor parenting and life decisions gone wrong.  We hope you enjoy the discussion and participate if you've read the book!  If you've not yet read Middlemarch, our discussion will be in the archives, waiting for you.

Heather:  First off, I thought that funeral was such a farce, albeit not a funny one. I am not sure if Eliot meant it to be funny, but it was plain ridiculous. That Featherstone wanted to have everything controlled down to the last pallbearer, really made me dislike him all the more. He was controlling everyone, even from the grave. It made for one heck of a show to the casual observer, but it was just awful and ostentatious.


Aarti:  I know!  I mean, how much of a control freak can you be, to go so far as to set rules for people to follow after you’re dead?  I realize that you want to be remembered in a certain way, but aren’t you just past caring at that point?  It’s not like it makes any difference to you when you’re dead... but I suppose it gives us more insight into Featherstone’s character!


Heather:  I was surprised by the reading of the will, and the new stranger in town. I NEED to know more about him! Was he an illegitimate son? A relative? Was this a case of Featherstone fostering a real connection with someone and leaving him the fortune, or was this just another horrible manipulation from the grave?


Aarti:  Yes, it’s hard to imagine that Featherstone was ever romantically connected with anyone, isn’t it?!  I can’t imagine the woman was willingly associated with him.  And I wonder if Featherstone cared for the man throughout his life- I bet he didn’t give him anything before leaving him everything in this will.


Heather:  When the second will came out, I was angry, yes, but my heart just broke for Fred. It made everything so much more complicated. Now there is no way he can pay back Caleb Garth, and win back Mary’s respect. But I have a feeling that Fred is resourceful, and will do something to get his feet under him. I just think it’s a shame that the second will wasn’t burnt, but it Featherstone’s wish to do that indicates that he was having some very remorseful feelings before his death. It’s a shame that things couldn’t work out better for Fred in this matter, and I can understand where Mary feels responsible. That may factor into a forgiveness for Fred in the future though...


Aarti:  I don’t actually think Featherstone felt remorseful at all before his death.  I think he just wanted everyone to play to his tune long after he was gone.  I just don’t understand how a man could be that selfish and unkind to everyone around him, and still feel like he had “won” at life, you know?  I also don’t feel too bad for Fred.  Mary made it clear, anyway, that she didn’t want him unless he learned how to do something useful with his life, so I think this is an opportunity for him to really prove to her that he deserves her (even though he really doesn’t, if I want to be honest).  I felt more horrible for Mary, who feels like she was the one who brought all this about when that isn’t the case at all!

Now make the jump to Heather's blog to see the rest of our discussion!