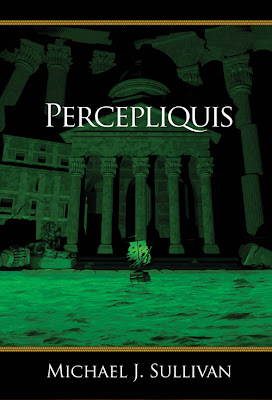 Percepliquis is the sixth and final book in Michael J. Sullivan’s Riyria Chronicles. It is always bittersweet to begin the final book in a series, and this was no exception. While I haven’t enjoyed the later books in this series nearly as much as the very early ones, I do like Hadrian and Royce, and am sorry that I won’t be seeing any more of them.

This book seemed like more of a standalone than the two previous ones and I can’t help but wonder (as I wonder when reading every epic fantasy series that I commit to) if the previous five books were completely necessary to this final story arc. They were entertaining, yes, and I enjoyed reading them, but they were more background than anything else.

This book seemed like a light version of The Lord of the Rings.  There are elves that are shiny beacons of beauty, with long lives, pointed ears and poetry. There are dwarfs that are gruff and angry about their treatment at the hands of humans.  There’s a wizard.  There are malevolent, sub-human creatures that try to kill everyone.  There is an inter-species group sent to the depths of an underground cave (complete with a magical, dangerous creature) to help avert a crisis of complete annihilation. There’s a piece of clothing (similar to a certain Ring to Rule them All) that, when worn, seems to put the wearer in danger.  This book has significantly more humor than The Lord of the Rings does.  It also has more female characters in substantive roles than The Lord of the Rings does, which is very refreshing.  I enjoyed reading the history of the world.  But the book, in my view, suffers from the same problems that I raised earlier in the series.


For example, there is really heavy-handed foreshadowing.  One character early on tells another one:


"I managed to strike a deal with a member of the empress' team.  At the right moment, my agent will betray them."

Wow.  Way to give away what could have been a very tense moment.  In my opinion, this method of telling and not showing really took the later books in the series from being complex stories for adults to ones that are aimed at a younger audience.

But as usual, my biggest problem was with Arista, the wizard.  Again, she spends half the book either screaming or crying, but apparently this is really attractive behavior because everyone seems to adore her (except, of course, the One Man she wants to adore her).  And she continues to sit around bemoaning the fact that she isn't beautiful.  If I were a young girl reading this series, I'd probably develop a complex that men aren't interested in any girl unless she is a devastating beauty.

Even more troubling, though, she spends some time trying to bring people back from the dead.  She does this twice, and no one seems to think there is any moral ambiguity involved in her actions.  I, on the other hand, was pretty horrified, not only because I feel the issues related to a person being brought back to life should probably be explored in depth, but also because it is a complete deus ex machina.  Any time someone was hurt or ill or dying (or dead), I never as a reader trusted that nature would take its course.  I always felt like Arista would come do her thing.  And she always did.

And the bringing people back from the dead thing isn't the only deus ex machina in the book, either.  There's also a wizard that can, conveniently, hear everyone else's conversations no matter where they are, and so knows exactly what happens at all times.  I mean, really?  Is that necessary?  I was frustrated that the book could have been so much more subtle and intricate, but instead became obvious.

I did enjoy that Sullivan tied up all his loose ends, though.  So many times, authors of long series seem to drop stories or forget characters or leave things very ambiguous.  Sullivan doesn't do that, and I am grateful to him for that.  I knew what all my favorite characters were going to do, and I was generally very happy with their decisions.  I My favorite aspect of this book was its history.  I loved learning about how the world has evolved, how the religion has evolved with the world, and how history has been taught according to who is in power at the time.  Seems to fit pretty well with the way history works in our world, too.  Sullivan took the time to create a very nuanced and beautiful world history, and now that the entire series has been written and read, I look forward to going back to previous books and seeing all the hints and details that I missed on the first go-through.

This series of books has been picked up by major fantasy publishing imprint Orbit (yay for indies being noticed!) and is being released as a trilogy- Theft of Swords, Rise of Empire, and Heir of Novron.  If you want to sink your teeth into some epic fantasy and get through the whole series in less than five years, here's your chance!