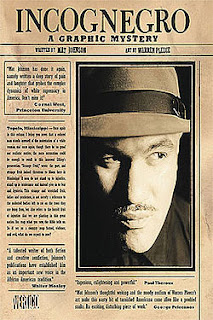 Incognegro is a graphic novel by Mat Johnson and illustrated by Warren Pleece.  In the midst of the Harlem Renaissance, Zane Pinchback is an undercover reporter.  He's a light-skinned African-American male who "passes" as a white and reports on illegal lynchings in the South under the pseudonym Incognegro.  But life is dangerous and he's had too many near-misses to feel comfortable any more.  Just as he's ready to hang up his hat and try something new, he gets word that his older brother is in jail in Mississippi, accused of murdering a white woman.  And in 1930s Mississippi, a Black man has little chance of making it to the trial alive.  Zane heads back to Mississippi with his best friend Carl to save his brother by determining who really did kill the white woman.

This is one of those books that instantly jumped out at me while browsing the library shelves.  The title is so evocative, and the cover really drew me in.  I was so intrigued by the idea of an undercover reporter who fought for civil rights while posing as a white supremacist.  The book doesn't disappoint on that- in these 140 short pages, there is a healthy combination of both overlooked history and interesting mystery. 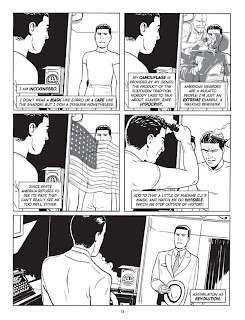 As Trisha points out in her review, this graphic novel is written in stark black and white- there are no obvious visual distinctions between the Caucasians and African-Americans in this story, which I appreciated.  You don't hear anything about people "passing" as white these days, and it's nowhere in the history textbooks, but it was clearly very common as there are so many books written about it.  Usually, though, the Blacks that passed for white did it for their own safety, or to strive for a life better than that which would be available to them as Blacks.  It was so interesting to read about Zane Pinchback, a man who used his light skin tone to bring attention to issues that were overlooked and ignored by the white majority.

The novel doesn't hold much back.  There are lynchings, angry mobs, overt racists and some very disturbing scenes.  I appreciated that the authors didn't try to sugarcoat anything and made clear just how dangerous life was for African-American males in the Deep South.  I can understand, based on that, why the author chose to make this a murder mystery novel.  It gave him the ability to bring up a lot of issues and complexities while playing within the societal norms of the period.  But at the same time, I wish that the mystery didn't have such a central role in the story.  There were twists and turns that added to the mystery and really seemed to come out of nowhere, but they took away from the immediacy of the central issue.  I knew going into the story that Zane's brother was innocent, but I didn't care nearly as much about knowing whodunnit as I did about making sure everyone I cared about got home safely. 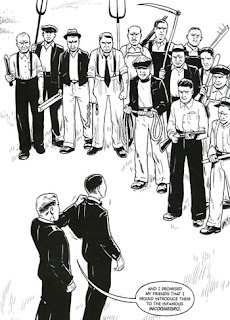 I don't want to say that the mystery made the story weaker because this really is a mystery novel at its heart, but one written within the context of racism in the 1930s.  What I mean is that I was much more interested and drawn in by the cultural and historical aspects of the novel than the mystery.  I love the idea of a masked avenger such as Incognegro, and I wish that the historical context had comprised more of the story to flesh out this role and the many difficulties that a person who "passed" faced (and still faces) in life.  The glimpses we get into the life of an African-American male in this era are telling and frightening.  Even for a man that passed as white, life was fraught with the danger of being discovered, and one could hardly trust the justice system to be fair.

Over the past few years, I've really come to understand why so many African-Americans do not trust the justice system in which most of us put our faith so blindly.  I've only come to that realization because of reading books such as Incognegro.  And it saddens me because I know there aren't many Americans that seek books like this one out, and as the schools never teach this side of history, they go through life blind to the very real and very recent history of their own country.  I know so many people that seem to think racism is a thing of the past, when it so clearly is not.  And even if no more racist people were born from this day on, there would still be a very scarred and painful history to contend with here in the States.  Books like this one are so important for our combined knowledge, and if adding a spice of mystery and a dash of danger makes people more likely to pick a book up and learn about their country's sordid past, then I'm all for that.  Incognegro delivers very well on that front - it infuses an interesting whodunnit with a good dose of forgotten history that will stick with you.
Musings by Aarti at 11:18 PM