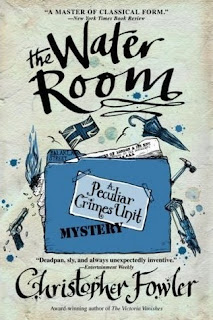 I've had Christopher Fowler's Peculiar Crimes Unit mystery series on my radar for a while, and so was very, very pleased when I recently found the second book in his series, The Water Room, at a local used bookstore.  I have not read the first book in the series, Full Dark House, before, but had very little trouble following this book.  I hope to go back and read the first in the series soon, though.

The Water Room doesn't feature as unusual a detective as did The Janissary Tree, but Arthur Bryant and John May are, in my opinion, far more entertaining and fun to spend time with.  Bryant and May are octogenarians on the London police force.  They're on the Peculiar Crimes Unit, meaning they get the more long-term and unusual jobs that the Metropolitan Police don't have the time or capacity to handle.  They are facing budget cuts and bureaucratic red tape, though, and their unit could be shut down at any time.  That doesn't worry the team enough to actually follow police procedures, though.  They do things their own way, and manage to get results using a lot of internal knowledge and old-fashioned sleuthing.

That's because Bryant and May are a little old-fashioned themselves- they're both well into their 80s, meaning they not only survived the London Blitz, they also lived through the crazed 60s, Margaret Thatcher and a new wave of terrorism.  They have also seen London evolve and grow and change over time, and the knowledge they have picked up about the city (particularly Bryant) is absolutely amazing.  Meaning, the knowledge that Christophe Fowler, as the author of this book, has about London is truly overwhelming.  And putting that knowledge into the thoughts and mannerisms and emotions of two elderly men- that's really quite masterful.

The plot of this book is, like many mystery novels, quite complicated and convoluted.  So instead of trying to describe it, I'll just tell you that it has a lot to do with London's many underground rivers.  When you think of London, you probably only think of the Thames going through it.  But there used to be so many others, even until quite recently, and as the city grew and the rivers got dirty and filled in, they went underground.  But when it rains- and especially when it rains a lot- the underground tunnels and networks and fantastic city plumbing fill up again, and the old rivers rush once more.

I realize that it doesn't sound quite that exciting and interesting to read a lot about rivers that have shifted underground, but if you enjoy history, then it's completely fascinating.  Fowler works in so many facts about the history of London into his descriptions of these rivers.  I really wish that I could take a tour of the tunnels (except that they seem pretty dirty and dangerous) and see where all of these forgotten rivers - the Fleet, the Lea, the Westbourne, the Tyburn - all of these rivers have been incorporated into so many town names and geographic landmarks, but the rivers themselves have largely disappeared.  Christopher Fowler really served to bring them to life again in this novel.

Another thing that really hit me when reading this book is just how few inter-generational relationships exist.  People rarely have friends from outside their own generation, and this struck me as very sad.  Partly because, as you get older, fewer people from your generation are around, and so getting older can become a very isolating experience.  Arthur Bryant and John May are both wonderful detectives with very active lives, but Fowler also captured just how frightened they were of being alone or being forgotten.  Bryant, for example, has an interlude thinking the following (apologies for the length):


But retirement meant sitting at home as the world passed by his window, creeping to the high street and forcing conversations on uninterested teenaged shophelpers, or - God forbid - listening to litanies of illness from his peers. He had no children, no family to speak of, no savings, nothing left except his job.  The women he had loved were dead... He admired the enthusiasm of the young, their energy and freedom, but the young rarely reciprocated with friendship.  They exercised an unconscious ageism that had been placed upon them by the world's all-conquering emphasis on youth.  The elderly embarrassed them, bored them, failed to match the frenetic pace of their own lives.  Elders weren't respected in English-speaking countries, they were merely taking up room.

And it's so true.  I don't engage much with the elderly.  I don't come across them very often.  If I do talk to them, it's usually an isolated incident that is rarely repeated, and it's not generally on a very interesting topic.  But much like Bryant admires the young, I think people who have lived through the past several decades of history are pretty fascinating, too.  They all have seen so much history, and seen so much change over the course of their lives.  They're just a wealth of social commentary in human form.  And I can understand why Bryant is so sad and lonely because he is amazing.  He knows a lot about rivers, for one thing, but he also knows a lot about everything else.  A conversation with him would never be boring.  And he wants to share what he knows, but there are very few people left who listen to him.

I honestly didn't understand all the loops and tangles involved with this mystery.  It was very complicated, so I was quite grateful for the wrap-up explanation at the end.  But I am going to stick with this series- like so many quality mystery series, it's so much more about the narrator's progression and evolution than it is about the mysteries.  And in Bryant and May, two elderly men trying so desperately to stay relevant, I've met some new friends that I would like to get to know better.  Just as Marcus Didius Falco introduced me to the Roman empire in ways I never would have expected, Bryant and May have so much to share with me about London and its history.  I'm looking forward to the ride.
Musings by Aarti at 8:00 AM