I was introduced to Guy Delisle when I read the graphic novel Burma Chronicles.  I really enjoyed Delisle's travelogue about everyday life in Myanmar, so when I saw that the University of Michigan library had Pyongyang on the shelf, I immediately picked it up.  Pyongyang takes place slightly earlier in Delisle's life, I think, as he doesn't travel there with his wife, but instead goes to work as an animator.

Pyongyang isn't really a "journey" in North Korea.  All foreigners are strictly supervised and not allowed to go anywhere without a guide.  If they do, there's a lot of ruckus created.  Apparently, no one from outside the country is allowed to see things that don't present North Korea in a positive light.  Consequently, Delisle spends the vast majority of his time in the capital city, which seems to be a pretty depressing place with insufficient power, not enough food, dimly-lit hotels and no contact with the outside world- North Korea is the only country in the world with no internet access.

I am so glad that I discovered the (depressingly small) "browsing collection" of books that the university has at its undergrad library.  The graphic novel section is small but well-stocked and I'm really looking forward to reading Stitches and Joe Sacco's political journals.  It's really nice to break up the day with a picture book, and Pyongyang was a treat in this manner.  The travelogue written in much the same vein as Burmese Chronicles - a lot of details about the ins and outs of daily life (for example, Delisle describes the fly-swatting techniques of two hotel workers in pretty great detail) and the interactions that Delisle has with the locals and foreigners with whom he shares his time. 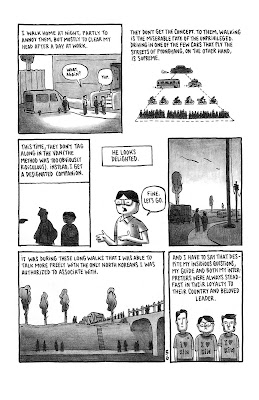 This book felt more cynical than Burmese Chronicles, however.  Delisle clearly hates the regime in North Korea; readers know this very early as his choice of reading material for the trip was George Orwell's classic on Big Brother, 1984.  His interactions with the locals are colored with disbelief and skepticism about the lives they lead.  He wonders how people can be so delusional as to believe in the "Dear Leader" and his greatness, and to think that the rest of the world is so much worse off than their own country.  For example, America is an evil empire and Paris is just "known" to be dirty, poor and full of horrible people.

It's obvious that Delisle has trouble swallowing these lines, especially when they are combined with casual mentions of people who have gone missing and not returned, the brain-washing spewed by the news outlets, the appalling lack of modern technology and the many disturbing rules and regulations in place.  (For example, everyone must work six days a week and then "volunteer" on the seventh day.  They also are not allowed to put anything on a wall that has a portrait of the Supreme Leader on it, and pretty much every room has a portrait or two in it.)  While Delisle's comfort was completely understandable, it also really colored the narrative and it's obvious that it was impossible for him to feel friendly with any of the North Koreans because he literally had nothing in common with them. 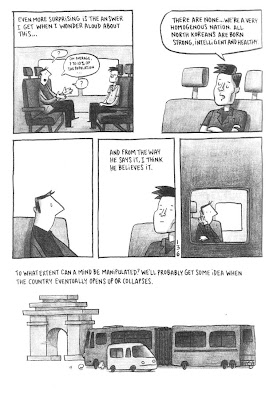 And really, the result is disturbing, to say the least.  Many times, Delisle wondered whether the North Koreans really believed what they were saying, or if they were just so terrified of the regime that they never once let their masks slip.  For example, once Delisle went out exploring on his own, without a guide.  Everyone ignored him, barely even making eye contact.  When he returned to his workplace, his guide was shaking with terror at the (unspoken) consequences he would have faced had a foreigner been allowed out.  But as Delisle hadn't taken a camera with him, no permanent damage was done.

Another time, Delisle asked his guide why there were no physically handicapped people around, as they generally make up 7 to 10 percent of the population.  His guide replied, quite seriously, that North Koreans were physically perfect specimens and not one had ever been born with a physical handicap.

They also believed that Kim il-Sung, the Supreme Leader, had been a brilliant military mind, even though he had never served in the military.  They tell time starting from the moment of his conception (how awkward).  They believe he was born on the highest peak of the country, under the auspices of a double rainbow.  (He was actually born in Siberia.)  The entire populace is made to believe that they live in some version of the best of all worlds, a la Candide, and it's no wonder that Delisle is thoroughly creeped out by their tight smiles, nervous laughter and strict adherence to rules. 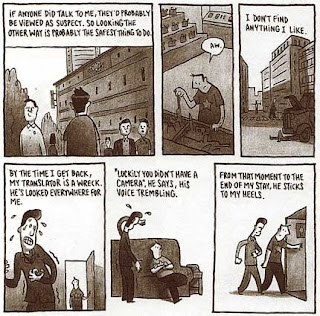 In that context, perhaps it's unfair of me to think that Delisle was too cynical and closed-minded in this book.  But in Burma, he really did find humor and friends and kindness in his hosts.  It seems like in Pyongyang, he was completely unable to crack the exterior shells of the North Koreans.  He couldn't even get them to admit the real reasons that he was not allowed to go some places, but was forced to go to others.  He visited two Museums of Friendship (one for Kim il-Sung and one for Kim Jong-li), but whenever he asked to visit the demilitarized zone or a village, his guide deflected the request.  He went to a war memorial museum that showed all the atrocities North Koreans have faced at the hands of the Japanese and the French.  Every North Korean he met asked him why America is blocking the reunification of Korea into one country, when all Koreans want it.  That amount of blindness is truly terrifying.

Pyongyang was a really stark and striking portrait of a country under lockdown and the disturbing effects of a people ruled by an iron fist.  I learned so much more about North Korea than I've ever considered before, and now, when I read news about the region, will be slightly better equipped to understand the threats and consequences of what's happening.
Musings by Aarti at 11:30 PM