Musings: Craze - Gin and Debauchery in an Age of Reason 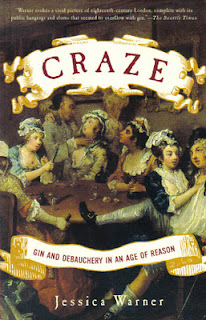 Whew, this book has been on my TBR since summer 2006, so I felt quite satisfied changing its mark in LibraryThing from "To Read" to "Currently Reading" and then finally adding the tag "2012" as I completed it.  Taking books off the TBR pile feels so GOOD!  You'd think I'd do it more often just for the thrill of it.

Craze:  Gin and Debauchery in an Age of Reason has such an amazing title, I am a little disturbed that I let it sit on my shelf unread for so long.  Really, how could I go over five years without reading a book that has the word "debauchery" in the title?

Craze is about the proliferation of gin, a potent new alcohol, in London during the mid-18th century.  It was a pretty new liquor from the Continent that the London distillers fiddled with (pretty horribly, from what the book says) and sold at very cheap prices to the working poor in England's capital.  This alarmed the upper classes because there was a lot of drinking going on, and moreover, the drunkenness was visible to the rich, which was NOT ok.  So laws were passed- several, in fact- over the course of about 20 years.  This book details the Gin craze, the laws to govern distribution of the liquor, and the citizens' reactions to those laws.

I don't drink much liquor any more, sticking mainly to wine and beer, but when I did, I was a big fan of gin.  I do love a good gin and tonic and now that mixology is all the rage, I also like gin drinks with frothy egg whites in them.  Sadly, this is not the same gin that was hawked on the streets of London by the poor during the 18th century.  They drank some sketchy stuff in those days, on those streets.

One of the reasons I enjoy alcohol, though admittedly not the main reason, is that there is such a fantastic culture and history behind nearly every single alcohol in the world.  It's amazing.  And, parallel to that culture and history, there is the prohibitionist culture of people who dislike drinking and its effects on people and the population and the country and mankind, see it as an affront to religion, etc.  I love reading about how these two histories and schools of thought intertwine, throughout history.  It's so interesting to me to read about people indulging in sinful behavior and other people trying desperately to regulate that behavior.

That's really what this book is about, though not quite as balanced an account as I would like.  Warner did not engage me as an author the way that Jan Bondeson did in describing to me The London Monster.  She did not make the major players really come alive to me.  For example, she describes Daniel Defoe as a literary genius but also a complete "hack" who wrote for both sides of the gin argument, depending on who was paying his bills at the time.  But that's all we hear!  I didn't know Defoe was a hack- in fact, I didn't even know that the term "hack" meant someone who wrote for both sides of an argument.  But she barely mentions this at all, and then we hear nothing more of Defoe.  Sir Robert Walpole gets much the same treatment- we learn that he was an utterly corrupt politician who used government funds to build a massive home for himself.  But again, we get only that brief snippet and nothing else.  This happens throughout the book, and it got very frustrating to me.  While I understand that the book was about gin and attempts to regulate it, I would have greatly preferred learning more about the people involved and what motivated them than about the acts themselves.  I think that Warner really missed out on the human element.  This may be because there is so little documentation on the lives of the working poor in this period, so much so that Warner often repeated stories in her narrative.  It's unfortunate, really, because having real stories would have made this book much more emotional and lively than the dry recitation of laws.

And that, for me, made this book pretty hard going.  I admit to skimming a significant amount at the end.  Warner spends so much time detailing the laws themselves that she seems to lose the bigger and more interesting picture of analyzing their results.  For example, she says that the Gin Laws were passed by Parliament because they feared a mobile working class that had disposable income, and because gin was making women bad mothers and men bad fathers and they weren't procreating enough to have babies that would then become soldiers on the Field of Glory for England.  This was a bit of a difficult argument for me to stomach- it may be true, but I don't think Warner gave nearly enough proof that this was true.  Again, she just breezily referred to a couple of people who referenced needing soldiers, and then moved on to her next point.  When you are making such a huge and general statement as that, I feel you should support your argument more.

I'm glad I read this book because it's been on my TBR list for so long!  But it wasn't nearly as full of debauchery as I had hoped.
Musings by Aarti at 11:30 PM