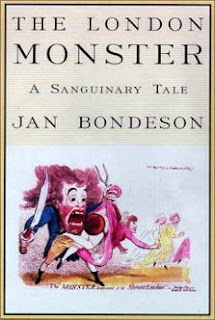 I have had Jan Bondeson's The London Monster on my shelf since early 2007.  I am not entirely sure what made me pick it up.  Do you ever try to figure that out?  Why suddenly, a book you've overlooked for years pops off the shelf at you and you finally settle down to read it?  I am sometimes able to trace my reasoning, but in this case, no idea.

The book is about a series of crimes in London in the early 1790s.  Pretty women complained of a man accosting them on the street, saying dirty things and then often cutting them across the thigh or behind with a sharp blade and then laughing in their faces while they screamed in terror.  Sometimes, he would insist that they smell a bunch of artificial flowers and then shove the nosegay in their faces, cutting them with a hidden blade.  He never killed any of them, but he wreaked havoc on the streets of the city and made many women fear to go out at night.  Eventually, Rhynwick Williams was arrested, charged and found guilty of the crimes and sentenced to a steep prison sentence.  He was defended by the fabulously namd Theophilus Swift, a larger-than-life Irishman who liked to be the center of attention and made the trial even more fantastic.

This book was absorbing and eye-opening.  It was so interesting to read about the very scant and ill-trained police force in London during the Georgian era, and even more interesting to learn about the ridiculous Theophilus Swift.  Many times, I thought the author must be exaggerating because I felt like there was no way such a man could truly exist- not only did he challenge a duke to a duel, but he also accused Prime Minister Pitt of trying to kill off the royal family, got into a huge kerfuffle with the deans of Trinity College and had a very volatile marriage.  This was the man who stood up to defend the rights of Rhynwick Williams.

But Swift wasn't the only interesting character involved in this drama.  There were the women who suffered at the hands of the London Monster, many of which described men of very different physical descriptions and were unable to positively identify Williams as the culprit.  There was the wealthy Mr. Angerstein, who offered a huge reward to anyone who could find the Monster, leading to a great many greedy people falsely accusing others of the crimes.  There were the judges that presided over the cases, the barristers for the prosecution and the defense.  There was the absolutely insane charge against Williams itself, made so that he could be charged with the felony of tearing people's clothes rather than the lesser charge of attempted murder (yes, it's true).

I am likely to enjoy any book set in England during the Georgian era, so I am quite likely biased in enjoying this book so much.  I really enjoyed the ambiguity surrounding the case- was Rhynwick Williams the London Monster or no?  There was so much obstruction of justice, so much inconsistency and so many theatrics in the trial that I can't believe it proceeded fairly.  It was a charged atmosphere- women in the 18th century were considered "weaker men" and often fainted at the sight of a mouse or a strong glance (so says the author, but I just find this so hard to believe).  And so of course, being accosted in the street would result in serious palpitations.  I wish more of the women had been open about the "vile words" that the monster used on them- no doubt they'd seem less vile to modern ears- rather than just blushing and avoiding the topic.  I can't help but think that it's stories like this that are used, time and again through history, to keep women inside and frightened and afraid of all the horrible things that can happen to them Outside.  The book put me strongly in mind of Arthur Miller's The Crucible in which a few bored women wanted attention and started a horrible mass hysteria.

I also loved all the illustrations in this book!  There is a rich array of political cartoons and notices and prints that really added to my appreciation of London's workings at the time.

However, I didn't love the end of the book.  The author spends some time describing mass hysteria, its effects, and the psychology of serial criminals.  I didn't find these chapters nearly as interesting as the story of the London Monster itself because the author doesn't seem like an expert on the subject of criminal minds, whereas he certainly seems to know a lot about the Georgian era justice system.


I really enjoyed this book on what has become an obscure historical footnote.  An appealing book that describes not only the legal system in place at the time, but also a lot of social norms and larger-than-life characters that lived in the period.
Musings by Aarti at 11:30 PM