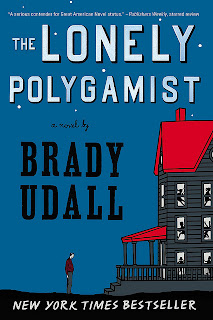 Zibilee recommended Brady Udall's The Lonely Polygamist to me a few years ago and I've had the book since then but have never read it.  I finally picked it up at the beginning of October and settled in to read.  I don't read much contemporary fiction, but the title is fantastic, and I always trust Heather's recommendations.

The Lonely Polygamist is about the Richards family, comprised of Golden, the father, his four wives (Beverly, Nola, Rose-of-Sharon and Trish) and their twenty-six children.  They live sprawled over three houses - the Old House, the Big House and the Duplex - in the Southwest in the 1970s and the book recounts just how lonely life in a big, dysfunctional family can be for everyone from the chubby pre-teen boy to the head of the family itself.

I suppose I should start this review by saying that I didn't manage to finish this book.  I am not sure if that is the book's fault or mine.  It's a much longer book than it first appears (I know that sounds silly, but sometimes 600-page books can be quicker reads than 200-page ones).  I started reading it in early October, and three weeks later, I was only about halfway through and not particularly excited about continuing to the end.  I should mention that this inability to finish can be blamed upon Jenny, who instructed me this summer to start watching Dr. Who.  I did start, in October, and was totally obsessed.  The only thing that finally allowed me to tear myself away was the start of the third season, which does not hold my attention nearly as much as the first two seasons did.  Thank goodness, or who knows if I'd get any reading (or work) done!  Any time I had an ickle bit of spare time, I would watch an episode of the show, not pick up the poor extra-Lonely Polygamist.  Poor Golden, losing out to a dashing time lord in a phone box.

I think the trouble for me with this book, other than Golden comparing unfavorably to an inter-galactic time lord, was the feeling that I kept reading without getting anywhere.  I could not find the plot, and the story read more like a series of short vignettes than one connected novel.  Which would have been fine, except 600 pages is a long vignette collection.  And the characters were so, so lonely.  There is a lot of black humor but no real happiness.  Golden is an awkward, often confused man who has lost control of his life and ended up a pillar of the Mormon polygamist community.  I didn't dislike him, but I also didn't like him much.  I just wanted to shake him and tell him to start taking control of his life.  His son Rusty had a fabulous narrative voice, so endearing and vulnerable, and was my favorite character.  But he is only one of many voices, and I found myself thumbing ahead, scanning for words like "dalek," and hoping that Rusty would turn out to be an alien in disguise.  Alas, he did not.  (Though he did randomly put on an English accent and get a bad case of disco fever.)

What I mean to say is, at a different time and in a different place, I may have fallen in love with Golden Richards and his sad, isolated family, but instead I fell in love with the Doctor and his sweet ride, the TARDIS, and life will likely never be the same again.

So I set the book aside and did the inevitable.  With a sigh of satisfaction, I turned on the TV, and watched another episode of Dr. Who.

PS:  For the record, my enamorment (that's not a word but it should be) with Dr. Who did stall around episode four of season 3, and I haven't watched any episodes of the show for about two weeks now.  Maybe over Thanksgiving break...
Musings by Aarti at 5:56 AM