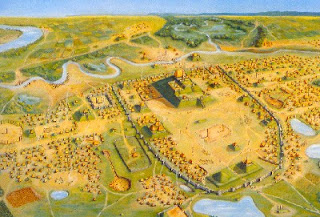 One of my all-time favorite books is Charles Mann's 1491.  It describes what America was like before contact with Europe, and it's fascinating.  In the book, Mann describes an ancient American city called Cahokia, which surprisingly enough is in my home state of Illinois.  I have never been there, but I want to go (even though, depressingly, it is probably the only World Heritage Site that has a four-lane highway and billboards going through it), and I thought it would be a great place to highlight for this week's Sunday Salon interlude.

Cahokia is situated close to St. Louis, outside Collinsville, IL, and is considered to be one of the greatest civilizations North America has ever produced.  It's a National Historic landmark and one of only 21 World Heritage sites located in the United States.  It is home to the largest prehistoric earthen construction in the US and Canada.  The largest mound in the park is about ten stories tall.  It's believed that there were originally 120 mounds in existence in this city, and currently about 80 remain.  They are shaped differently, some conical, some flat, some with ridges, and are thought to have served different purposes. 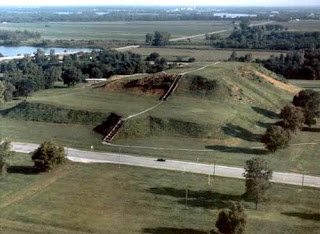 The largest structure on the site is Monks' Mound, which stands over 10 stories high and has four terraces.  Archeological evidence shows that there used to be a huge building at the top of this mound, probably a palace or temple.  You can imagine how imposing that must have looked, over the wide flat plains of the Midwest for miles and miles around.  But some of this flatness is due to the Cahokians themselves.  Research shows that Cahokia was orginally a series of small hills that the civilization leveled and made flat for its own purposes, maybe using the dirt from the hills to form those imposing mounds.  This central area was surrounded by a stockade for defensive purposes, complete with watchtowers.  Cahokia also was home to a Woodhenge, a giant circle of wooden posts that are believed to have been used to make astrological calculations.

Cahokia came into being around 600 AD and the mounds began to show up around 300 years later.  The civilization left no written records, which is unfortunate because it was clearly a very advanced and sophisticated society.  The Mississippians' trade routes extended from the Great Lakes to the Gulf Coast.  Its population is estimated to have been between 8,000 and 40,000 in the 13th century, which puts it on par with London or Paris at the same time.  But by 1300 or so, the city had already disappeared, well before the Europeans arrived on the continent, and no one is entirely sure why.  Was it environmental reasons?  The inability to support such a large community?  Climate change?  And where did the people go?  The Mississippi and Ohio basins very quickly became completely depopulated of people, and they didn't come back for a very, very long time.

Unfortunately, Cahokia has never gotten the attention it deserves from the US.  It was rediscovered by Henry Brackenridge in 1811, but Andrew Jackson's extreme anti-Indian policies had no room in them for the possibility of an advanced and sophisticated Indian culture that was city-based, not nomadic.  And many white Americans were far more interested in exploring Greece and Rome for their cultural roots rather than looking to the fabulous civilizations that called America home.

Ironically, it was the interstate highway system that gave Cahokia the funding it needed for extensive excavation.  Two highways pass either through or near the site, as mentioned above, but these two were built with the provision for archeological research, and so people began to pay attention to Cahokia.  They found mass sacrificial burials, extensive evidence of homes, and a landscape altered by human hands.  What they didn't find were many answers, and to this day, there are still many questions surrounding Cahokia and what happened there.  But at least now it's getting the attention it deserves in the archeological community.

Here's a link to a beautiful photo collection of Cahokia from National Geographic.
Musings by Aarti at 2:03 AM