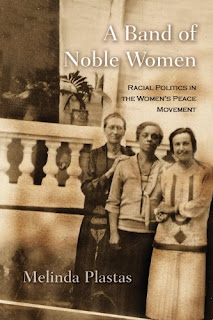 I heard about the book A Band of Noble Women:  Racial Politics in the Women's Peace Movement from Eva and was instantly interested in reading it.  We both got to read the book through NetGalley and decided to discuss our thoughts and share them with all of you in a joint review format.


A Band of Noble Women is a non-fiction book about key players in the Women's Peace Movement after WWI- a group of women internationally who wanted to ensure that war would never happen again.  As the group was comprised of women all over the world, there were many politics involved, but the US contingent in particular had to deal with the racial politics of the day and African-American women serving as delegates faced significant setbacks.  The result?  They started fighting for rights at home.  This book highlights some truly wonderful, fascinating women who did so much to fight discrimination in the world, specifically in the United States.  While the book had some severe flaws, I am grateful to have read it solely to have learned more about these strong and passionate women.

Below is Eva's half of our review of this book.  I responded to the same questions, and these are posted over on Eva's blog.  Check it out, if we've piqued your interest at all!

What did you find most interesting about this book?
I was engaged by the same frustrations [African-Americans faced as you were], but I was also fascinated by the early attempts at multicultural education! I think of that as such a post-60s phenomenon (and I’ve seen it dismissed as ‘political correctness’ too often) that to see such detailed curricula, all structured around making students more tolerant, was just wonderful. Plus, my mom’s family is from outside Buffalo, so I had a random superficial moment of identity there. ;) I love that you quoted one of Alice Dunbar-Nelson’s poems, since I very much identified with all the quotes included from her. Such passion and eloquence! I agree that Black women must have been torn in so many directions; not only the peace movement and racial aspects, but also rights for women v the interests of Black men. It’s amazing to me that they didn’t all just burn out.

How did you feel about the book's structure?
I agree [with you]:  the book was so weird! I disliked all of the jumps in time, all of the random acronyms being slung around, and the complete lack of an overarching theme/purpose. It felt like she was cramming in all of these facts, but she never took the time to step back and look at the book’s larger picture, at least not until the conclusion, by which time it was too late. I was never terribly excited to pick it up, despite my fascination with the source material. I’m sure she’s an excellent researcher, but I would have hoped for more polished and cohesive writing.

After reading this book, who do you want to learn more about and bring more attention to?
I found her very inspiring as well! That whole group of ‘settlement’ women just fascinate me; I remember reading Jane Addam’s Twenty Years at Hull House in high school and just being blown away. I was also very struck by Alice Dunbar-Nelson: she was a journalist who transcended ‘women’s issues,’ as well as a teacher on various occasions and writer (I want to read her play Mine Eyes Have Seen). She travelled a lot in pursuit of stories, and I admire the courage it must have taken for a Black woman of that time to go around the South reporting on living conditions! Later, she got into politics and as part of the Delaware Republican State Committee worked for anti-lynching legislation. I just find her continual willingness to speak out and act on behalf of her beliefs in justice very inspiring, not to mention her talent for writing.

Thanks for a great discussion on a book that profiled so many interesting people, Eva, for all its structural flaws!

Note:  This review is based on an advanced reader's copy.  Eva and I both received this book for free to review.
Musings by Aarti at 11:40 PM