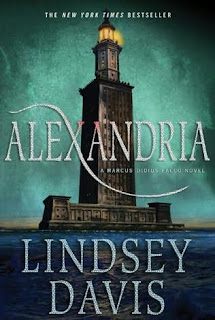 This time, Falco is in Alexandria, Egypt, home of the famed library.  Unfortunately, the head librarian turns up dead in a room locked from the outside and Falco is forced to look into the situation. The head librarian job is a big deal in Alexandria, and there are many who want a chance at it, even if it means murdering other candidates.  But with Falco on the job, you know you're in for a treat, and a funny one at that!

I have read and reviewed every Falco mystery on this blog, so I don't think I will be convincing anyone to read this series with this review if I haven't already managed it!  I love Falco- I love how cynical he is, but how he also is so upset by the corruption around him, and he's always willing to help someone out.  He's such a great character, and I've really enjoyed getting to know him so well over the past nineteen books.  (And there's a twentieth out, too!)

What I most enjoyed about this book were the great details about the library at Alexandria.  I think we now consider it this hallowed place where so much knowledge was kept and ultimately destroyed.  I know I have spent time before thinking of all the history and culture and mythology we're missing out on by not having access to so many of the stories that were kept at Alexandria.  But by doing that, we forget that the library was a bustling place with the same intrigues and difficulties most places have.  This book is really quite timely, as it discusses whether libraries should house all books or just the ones people read, whether classics are better to have than popular fiction, how many books the library should hold, etc.  If you're a librarian, I think you would  appreciate the discussion as I'm sure Davis wrote it with today's many library debates in mind!  It cost a lot of money to upkeep a library of Alexandria's size, and if you believe Lindsey Davis, that led to a lot of fraud and scandal.

I generally prefer Falco at home in Rome because I really like his friend Petronius Longus.  While I really don't like his mother or his sisters at all, I think they add a lot of humor to the stories.  Falco's dad was in this one, but barely had a part in it.  And I admit some parts of the Falco series are starting to wear on me.  Falco spends a lot of time talking about how great his relationship with his wife Helena Justina is.  He says this in every book and by now, I just want to say, "WE GET IT, FALCO!"  I suppose if you're a new reader, knowing just how strong their relationship is is important, but after 19 books of making eyes, I just wish it wasn't discussed so much.

This wasn't one of my favorite Falco outings, but I think it has sentimental value for me only because from what I know, the next book in the series, Nemesis, is much darker and probably will start leading Falco and Helena down a less carefree and happy path.  So maybe Davis shares all the details of their marriage with us in this book so we can compare how different it is in the next book.  I'm still sticking with this series, regardless.  At this point, it's less about the mysteries and much more about the character development.
Musings by Aarti at 11:05 PM