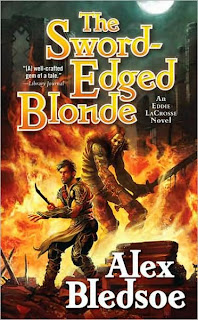 The Sword-Edged Blonde is the first novel in a fantasy-detective series by Alex Bledsoe centering on Eddie LaCrosse,  a former mercenary who now makes a living by finding missing princesses and solving other complex mysteries while trying to hide from his past.  This time, his best friend in the world, King Philip, asks for Eddie's help.  The king's wife, Rhiannon, has been accused of murdering their only son.  Only King Philip doesn't think she did it and wants Eddie to prove her innocence.  Eddie accepts the case, knowing that doing so will require him to confront all the demons from his past.

I haven't read other books in the "fantasy-mystery" sphere, but if this is an indication of what the genre mash-up can do, I am excited to try more.  Eddie LaCrosse reminded me of a young Marcus Didius Falco from Lindsey Davis's mystery series set in Ancient Rome.  He describes his cutting-edge sword, uses modern slang, has a dark past and still listens to his conscience.  It was entertaining to spend the space of a book with him, and I wouldn't mind getting to know him better.


I liked the way Eddie's story unfolds through the book, too- the many different perspectives that exist to describe the key moment in his past.  However, considering that Eddie spent thirteen years dealing with the aftermath of that one moment, I thought the ending was a bit of a cop-out. All of a sudden, it seemed like he was lighter and happier and willing to try the whole happiness thing again.

For the most part, this book felt much more like a historical mystery than a fantasy mystery.  I think this is mainly because most of the time, it doesn't seem like Eddie LaCrosse believes in magic.  So he seems much more like a skeptical detective trying to find the logical way out of everything, rather than someone who lives in a world in which magic exists.  I hope as the series continues, the fantastical elements get fleshed out more and we learn more about the state of the world Eddie inhabits.

I enjoyed this book a lot, though I had some quibbles with it.  Pretty light quibbles, I admit.  I don't really like names like Eddie, Phil and Mike in a medieval fantasy setting- they don't fit in well to me.  I also have spent more time than I'd like to admit mulling over the title of this book.  I do not understand what The Sword-Edged Blonde means.  Bledsoe explains it in a blog post here, and I understand why he changed the title, but I still don't get it.  I don't think it makes much sense.  But I enjoyed my time with Eddie and I look forward to learning more about him through his future adventures!

Note:  I received this book for free to review.
Musings by Aarti at 11:32 PM