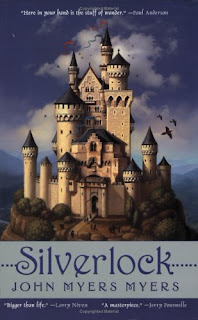 Silverlock is the story of A. Clarence Shandon, a good-looking, cynical man from Chicago in the 1940s.  On a sea voyage, his ship is wrecked and he is saved only through the help of a man named Golias, who helps him onto a raft and takes him, with a few stops on the way to the Commonwealth of Letters.  There, Shandon goes on a wide variety of adventures, meeting beautiful women, laughing giants, brooding princes and all sorts of others.  His journey takes him to the depths of Hell and back out again, and along the way, he becomes a brighter, better person who calls himself Silverlock.

I am not sure where I first heard about this story.  It gets great praise on the cover, with people calling it "the stuff of wonder" and "bigger than life."  And, of course, "a masterpiece."  It's on quite a few lists of best fantasy stories.  But what really drew me to the book is its premise.  One of the beautiful women Shandon meets is Circe.  The laughing giant is the Green Knight who confronts Sir Gawain.  The brooding prince in Hamlet.  There is also Robin Hood, Don Quixote and Dante.  References to Paul Bunyan and the Alamo.  Beowulf makes an appearance, as does Oedipus.

Silverlock is a conglomerate of hundreds of other stories.  All sorts of legends and gods live on in the Commonwealth of Letters, and one of the best things about reading this book is recognizing who you have encountered.  Some editions of the book even come with an index at the back, describing the literary reference and giving some background on the character or setting invoked.  My copy does not come with that, but to be honest, I'm not too disappointed.  It would be nice to check on every character (and literally, every character is an allusion to someone else from literature), but I think that would get tiring, and I appreciate knowing that if I read this book again in five years or so, I might understand a completely different cast of characters than I knew this time around.  It's a game of literary hide and seek, and people take away different things from the story.

This might imply that only those who are "well-read" will enjoy the story.  There is a heavily European bias to the characters that populate this novel.  Those versed in Greek literature, the Bard and American folk tales will probably understand more of the references than others.  But please don't let that hold you back from reading the book.  It's fun.  And as the book has dozens of these characters, but is only about 360 pages long, you only meet each one for a brief moment before moving on.

What makes it so fun are the songs littered throughout.  Shandon's guide and friend, Golias, is a bard and he breaks into songs (with even more allusions!) many times in the book.  They range from the epic ("The Death of Bowie Gizzardsbane") to the bawdy (Old man Zeus he kept a heifer in his yard/Hera smelled a rat and took the matter hard) to the spider-has-you-in-her-web (There's one now fixed in my spell/like a moth in amber).  I am not one who really enjoys poetry in most books- I skip over it completely in Lord of the Rings and in most other instances.  But these poems are pretty short and quite enjoyable.  I really liked what they added to the story. 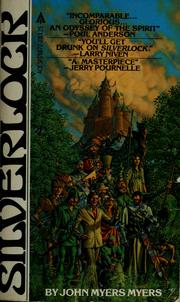 There were only a few things about this book I didn't like.  Granted, it was very based on male-centrist mythology, but the female characters in this story had no substance whatsoever.  To be fair, considering the number of characters come across, most characters are flat and one-dimensional.  But especially the women.  I also think the book dragged and changed pace towards the end.  In the first two-thirds, it was light and fun and allegorical.  In the last bit, though, it descended into a Dante's Inferno situation that lasted for a very long time (particularly in comparison with how short all the other encounters had been up to that point) and it became a little exhausting.  Last, Shandon is a difficult man to like for much of the story, and he's the one we spend the most time with.  There were so many characters I'd love to know better and spend more time with, but they flit by so quickly.

This is one of those stories that slips your mind easily.  If you ask me in a week, I won't know everyone Shandon encountered, or where the path of his journey led him.  But it was a fun ride through Storyland and I look forward to reading this book again at various stages of my life and seeing if I can pick up on more references.  And enjoy the songs, too.

I leave you with a quote:


"I'm giving you something to do. I don't think you've seen all around this problem, Shandon. It's big. In essence this fellow is looking for all there is of life. The great questions for a man are what to do about his time and his passion, and where to find friends and the money to live with them. When he's found the right answers, he's got all the four legs a man needs to walk on."