Vietnamerica: A Family's Journey is a graphic novel by GB Tran about his parents' lives in and escape from Vietnam in the 1970s and their subsequent life as refugees in the United States. GB grows up in America, distant from his parents. They don't tell him much about their lives before coming to the US, and as much of their family is still in Vietnam, he has no way of learning more about them. His father is intimidating and unapproachable and his mother often threatens to leave him, but never does. He hears, so many times, "You will never understand" and it is only after traveling to Vietnam with his parents as a 30-year-old that he realizes just how much he will never know.

I was very intrigued by the premise of this book because the Vietnam War is one of those subjects that you never learn much about in school, but that had a huge and profound impact on the American psyche. I was very interested to learn more about it from the Vietnamese perspective and to do so in graphic novel format was an added bonus.

It was fascinating to trace the paths of one family, see how people's lives intersected and diverged and came together again. Some were in the army, some were rebels and some stayed as disengaged from the conflict as possible. It was interesting, too, to learn more about the French influence compared to the American influence, and how enterprising Vietnamese had to adapt to changes in regime for their survival. The drawings varied from small, austere sketches to two-page wide detailed images. I would have preferred them to be in color, though, as in black and white, they appear very, very dark and sometimes it can be difficult to discern exactly what they are trying to show the reader.  (NOTE:  The final, published version of this book will have full color illustrations as seen here, not the black & white ones I had in my ARC.) 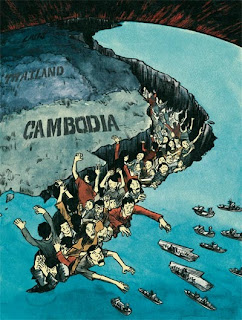 And while I enjoyed the pictures, I think they also gave me the most trouble. I had difficulty differentiating the characters. There were several, and the storyline went back and forth in time without much help to the reader. Also, the narrator and the person being spoken to changed many times and I had trouble keeping up. I got very confused as to who the narrator was at times, what year the narration occurred in, and who the narrator was speaking to. The pictures (for me) were of no help in this situation and I often felt very frustrated. While this did not ruin the story for me, it did make me feel very disengaged and removed. I enjoyed this book as an introduction to the Vietnamese experience in the second half of the 20th century, but it didn't quite meet my expectations.

Note:  This review is based on an advance reader's copy.  I received this book for free to review.
Musings by Aarti at 11:03 PM