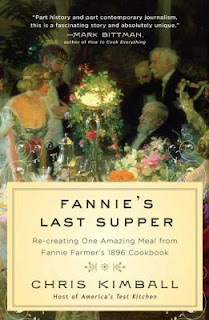 Fannie's Last Supper:  Re-Creating One Amazing Meal from Fannie Farmer's 1896 Cookbook is one of those books in the new-ish "food writing" genre.  It's written by chef Christopher Kimball of America's Test Kitchen about... well, recreating a meal from a Victorian era cookbook.

Except that he doesn't actually re-create a meal based on Fannie Farmer's best-selling American cookbook.  Nope.  He uses her recipes as a base, alters them pretty substantially, and then cooks them for a dinner party.  So while he shares a lot of interesting facts about cooking and its evolution, and about eating and the Victorian era... he doesn't actually deliver on the title of his book.

I enjoyed several aspects of this book.  I really liked the snapshot of Boston around the turn of the last century.  It was fascinating to read about grocery stores just coming into being, the way Victorian kitchens were set up, the types of food people ate, etc.  I love history, and this greatly appealed to me.  For example, I didn't know that oysters were so cheap in 1896.  Or that coffee was so well-loved.  Or that the food consumed was so international in scope, rather than localized the way I expected.  It was great learning about everyday activities and tasks.

It was also interesting to hear about how Kimball and his team came up with the meal he served.  However, as I am unlikely to ever serve cow brain soup or make my own gelatin from calves' hooves, I can't imagine I will have use for the recipes he shares in this book.  He spends a significant amount of time detailing the recipes, but generally they all follow the same format:  1.  Cook Fannie Farmer's recipe as specified.  2.  Decide Fannie's recipe is flawed.  3.  Rework recipe completely.

I understand Victorian tastes differ greatly from modern ones.  I also get that directions can be vague and ingredients can be hard to find.  But I got the distinct impression through this book that Fannie Farmer's cookbook was not good.  The recipes appear mediocre at best (at least to modern tastes), so I'm not sure why Kimball chose that particular cookbook as his base from which to host a Victorian dinner party.  The only reason I could think of was that it was the most popular cookbook of the era in America.  Which doesn't say much about American cooking circa 1900, that's for sure.

I also found the beginning of the book, where Kimball tries to justify the inspiration for the Victorian dinner party project, and the end of the book, where he tries to draw lofty conclusions from the experiment, to be a little tough to swallow (and yes, pun intended).  At the beginning, he spends time discussing the current food debate about how Americans never cook and therefore eat crap.  He is against this train of thought, pointing out that Americans still spend most of their money for food to be consumed at home and spend about an hour preparing dinner and that cooking is just much simpler for people now than it was a century ago.  However, by the end of the book, he goes on and on against "convenience" and states that people have too much spare time on their hands and spend most of it watching tv instead of being productive.  Which to me felt like a complete about-face from his comments at the start of the book.  This in turn made me feel like he couldn't really think of a reason as to why he went through so much trouble (and cost!) to host a full 12-course Victorian dinner, and that made the whole book feel much more gimmick-like to me.

Generally, I think this book was engaging and I enjoyed the Boston food history contained within its pages.  However, as the book is a companion to a PBS TV special, I think it would probably make more sense to watch the TV special than to buy the book.

Note:  This review is based on an advanced reader's copy.  I received this book for free to review.

Note 2:  I have switched from using the word "Review" to using the word "Musings" when I discuss a book.  This is mostly because I don't actually think I review any books on here ;-)  Just share my thoughts on them with you.  I think this might be a more accurate descriptor.
Musings by Aarti at 11:07 PM