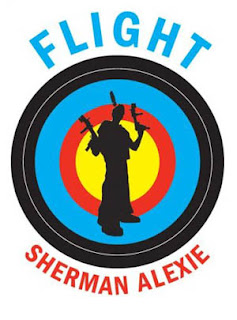 I really enjoyed Sherman Alexie's The Absolutely True Diary of a Part-Time Indian, and so I was really excited to pick up another book by him, Flight.  Flight is also geared towards the young adult audience.  It's a quick, engaging read about identity, non-violence and walking a mile in someone else's shoes.

I am a total Alexie fan girl.  While I didn't love Flight as much as I did Part-Time Indian, I think that is only because it was the second book I've read by him.  The first flush of my crush has faded and now I'm just comfortably in a relationship with his writing ;-)

Flight is about a teenager who calls himself Zits.  Zits' father left his mother soon after he was born.  And a few years later, his mother passed away.  Since then, Zits has been in and out of foster homes.  He has no family, no friends, and no hopes for his future.  What he does have is a police record- he's been arrested several times.  One of his jailmates persuades him to commit an act of violence, and as Zits walks into the bank holding a gun, he is zoomed back in time to inhabit the body of someone else about to do a very similar thing.

This was one of those books that I didn't really "feel" at the start.  I am not sure why, as Zits is one of those narrators who draws you in immediately.  He drops you right into his life, shares his past with you and then makes you party to all his thoughts and emotions from that point onwards.  At the start, I just didn't think Zits was all that great a person.  He was a juvenile delinquent and too cynical for a guy in his early teens.  But then he leaves his own body to enter that of someone who lived a couple of generations before him, and has to commit an act of violence with which he disagrees.  And suddenly, he starts thinking about how his acts affect others.  How people choose their paths.  How one act can lead to another that can lead to another, and you no longer feel in control of what you're doing.  How, as Atticus Finch says, you can never really understand another person until you walk a mile in his shoes.  Zits walks a mile in many people's shoes and ultimately comes to realize that his current life is not a life he would choose for himself.

In some ways, the stories are repetitive- Zits gets dropped into someone else's life at a critical moment, scrambles to understand the situation around him, comes to an epiphany, and then is dumped into someone else's life to start the cycle over.  I think for some people this could get tiring, but it never did so for me because Zits is such a fantastic narrator.  As the story continues, you can see why he is so cynical.  And he becomes much more vulnerable.  I know it's a bit of a cliche to say that kids go bad because they don't have good role models and they just want some attention- but in this book, I really believed it.  I didn't want to give up on Zits.

The only part of this story that I didn't quite love was the ending.  It wrapped things up very cleanly, in a manner I didn't find particularly realistic.  But hey... it's a happy ending.  There aren't enough of those in the real world, so I am happy to take one in a story that confronts so many issues about youth in America.  This book is much more about kids that slip through the cracks than about Native American issues.  Zits is Native American, yes- but he's a lonely kid first.

I really enjoyed this book.  Sherman Alexie is 2/2 for me!  I look forward to reading more by him and if you haven't tried him yet- I highly recommend it!
Musings by Aarti at 12:14 AM