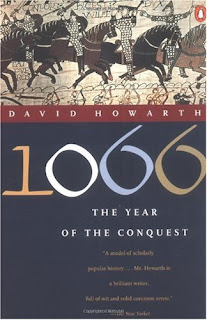 1066:  The Year of the Conquest is a very slim history by David Howarth about... well, 1066 and the Norman invasion of England.  It begins in a small English village in January of that year, detailing the class system in place and how the average person in England lived at the time.  From there, Howarth takes us to King Edward the Confessor's deathbed, details English succession law in place at the time (very different than after the Normans came in) and recounts Harold's rise to the throne.  We then cross the Channel to where Duke William hears news of Edward's death and Harold's succession and begins planning his invasion.  And then we are there for the Battle of Hastings, after which England's trajectory changed so drastically.


Now that I have a complete (mismatched) set of Thomas B. Costain's Pageant of England series, I want to finally get started on reading it!  But I decided before I did so, I should first understand how such a decidedly French-named family such as the Plantagenets took power in England in the first place.  Luckily, I've had 1066 on my shelf forever, and it's very short and perfectly readable, so now I'm set to begin.  I am completely ignoring the Angevins that came before the Plantagenets, of course, but well... one family at a time.

Anyway, back to this book.  It's good!  It's so short, which I thoroughly appreciate in a military history.  The actual battle takes up very little of the story-telling.  Also, Howarth clearly has extensive naval knowledge as he used a lot of sea-faring terms that I didn't understand but sounded very impressive.  He managed to bring the two main characters- Harold and William- into three dimensions for me, and he clearly sympathized with both of them.  I really liked getting to know these two men and I am really quite fascinated by King Harold and his father, Godwin.  I will have to read up more on them!

Two things really hit me while I was reading this book.  First- that I know absolutely nothing about English history before the Normans came in.  I am not sure how much of this history is taught in schools in England (anyone?), but it was so fascinating to learn how different the class structure and the culture was before William conquered the country.  I also love the English names.  Godwin.  Ranulff.  Gyrth.  Stigand.  They are fabulous and I wish they were still around.

I also was struck (as I am in pretty much every history book I read) by just how large a part chance played in this whole situation.  It is amazing how something like the weather can change the course of history.  Kind of terrifying as well.  And over and over in this book, I just felt so sad for King Harold (who would be on my Top Ten List of Historical Figures Deserving Bear Hugs, if I put one together) and the way the fates seemed to align against him.  The poor man probably died thinking God had forsaken him (in fact, it's quite likely he did die thinking just that), and that just seems like such a lonely, heart-breaking way to go.

I really enjoyed this brief history of the Norman conquest.  It definitely whet my appetite for learning more about English history prior to the 11th century, but also makes me very excited about my Plantagenet reading.  It also helps explain a lot about the culture and psyche of the English upper class being so obsessed with the French up to at least the Regency era, if not beyond that.  Highly recommended if you have any passing interest in English history!
Musings by Aarti at 12:37 AM