TSS: Is that book a Pamela or a Shamela?

Well, it has been a very long time since I have done a Sunday Salon post.  Mostly because I didn't have much to say, but also because I was out of the country.  But now I have an idea for a group of themed Sunday posts to share with you all for... as long as I can think of posts that go with the theme.  I shall start that next week, unless I forget to do so.  In which case, I shall start it on a different Sunday. First, did you know that we have chosen another small press for the Spotlight Series?  We are highlighting Graywolf Press, which is a publisher in the great state of Minnesota!  Not only is it a fabulous small press that focuses on poetry and works in translation (among other more traditional book types), but it's also a non-profit publisher!  So if you participate in this series, you will be doing good twice over.  First by giving attention to a small business, and then by helping out a non-profit!  A win-win, isn't it?  So I highly recommend you mosey on over to the sign-up post by June 30th and get in on the action.  The series will take place between July 18 and 31.  Get pumped!

Now to the bulk of my post!  The other day on Twitter, I was discussing The Hunger Games, and then that led to discussion (however brief) of Twilight.  I said that if nothing else, Twilight did give a lot of people the opportunity to practice satire, and perhaps some of that satire will live on as classic literature in the future, the way that Shamela did for Pamela.

If you do not know the story of Pamela and Shamela, it is this.  Pamela (heavy-handedly subtitled Virtue Rewarded), written by Samuel Richardson in the 18th century, is an epistolary novel about a serving maid who must keep her innocence and her wits about her while her lecherous employer tries to seduce her.  This goes on for hundreds of pages of Pamela trying desperately to be chaste and virtuous while staying employed.  Pamela was a huge hit in England when it came out.  Everyone read it.  Including the famous Henry Fielding, who did not understand what all the fuss was about. 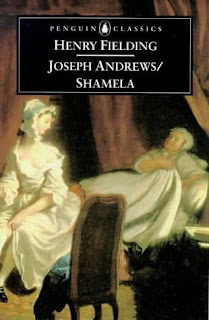 Fielding was so disturbed by the book's popularity that he promptly skewered it with satire, writing An Apology for the Life of Mrs. Shamela Andrews, (and then writing an even longer satire of it, Joseph Andrews), in which Shamela is not defending her virtue, but trying very hard to throw it away so that her master will marry her.  And her letters are written in hilariously colloquial language (virtue = "vartue").

And now it is Shamela and Joseph Andrews that are the classics, and no one reads Pamela, even though it was so popular when it came out.

Are there contemporary books that you can see in similar scenarios?  Is there a book that's so popular out there, and you just don't get it?  One that, were you a satirical genius like Henry Fielding, you would skewer with your mighty pen?  What would it be?

PS- Happy Father's Day to all the dads out there!
Musings by Aarti at 12:43 AM