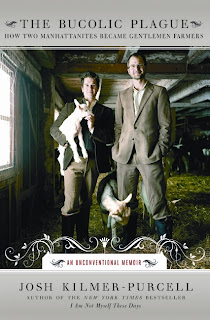 The Bucolic Plague:  How Two Manhattanites Became Gentlemen Farmers is a somewhat misleading title.  Yes, it's about a gay couple in New York that buys a rural mansion, but it's not so much about the farming as it is about relationships and the pursuit of perfection.

Josh Kilmer-Purcell is a former drug addicted drag queen (he brings this up multiple times in the narrative, though I am not sure how it was particularly relevant) turned ad executive.  His partner, Brent, is an MD/MBA who works for Martha Stewart.  On their way home from apple picking, they come across the beautiful Beekman mansion in Sharon Springs, NY and impulsively purchase it.  Then they hire a caretaker to raise his goats there.  They plant a large vegetable garden, have guests over and set about living the dream- city living during the week and relaxing on a farm on the weekends.  Perfect!  Josh soon wants to quit his job and live full-time on the farm, and they set about making this dream a reality.  Except, they soon come to find, making dreams reality takes a lot of work and can be exhausting, and as the economy collapses around them, Josh wonders if it's a worthwhile endeavor.


I have read a few books lately that were different than I expected but pleased me, anyway.  This is one of those books.  I was expecting something along the lines of all the local food movement books out recently, about going back to a more simple and physical life than that offered by urban living.  That is not what this book covers, though.  In fact, Kilmer-Purcell seems to have no trouble at all with his garden; he seems to grow a bounteous harvest from the start.  (No doubt due to his Wisconsin upbringing.)  And he doesn't spend much time talking about the actual restoration of his fabulous mansion or raising 80 goats or how he managed to grow so many amazing vegetables.

Instead, he talks about Martha Stewart.

But not only about Martha Stewart.  He also talks about Oprah.  And it is like those posters you see sometimes, "All I need to know in life I learned from Martha and Oprah."  Except that the ideals Martha and Oprah espouse are not real for most people.  And that's the trouble.

Brent and Josh try to make a living off their farm by selling goat's milk soap.  They also have a blog and are now in a reality TV series.  But the blog only shows beautiful pictures of finished products and perfect fruit and an idealized bucolic lifestyle.  That's not how life really is.  Sometimes fruit is bruised and sometimes pies burn and sometimes, a weekend consists solely of cleaning the chicken coop.  But no one ever wants to show that side to the world. 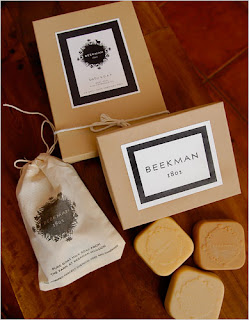 And why is that?  At one point in the story, Josh describes spending an entire day taking pictures of his pie-making process.  Ordinarily, it would only take him a few hours to make a pie, but this time, it took forever as he photo-documented the process.  And then he put it in the oven and forgot about it.  It came out burned.  Instead of posting this picture and saying that he burned the pie, he just didn't post period.  Not one picture from his whole day's work.  Just because his pie was burned.

Josh is not the first person to ever burn a pie, nor will he be the last.  He could, however, have just shared that story with everyone on his blog and created a more personal "Hey, I take spectacular pictures and post them on my impressive website documenting the travails of mansion living, but I'm human, too."  But he didn't.  And so the moment was lost.

This upsets me in many ways.  Based on her show and her books and her magazine, one gets the impression that Martha Stewart has never in her life made any sort of mistake, and that her whole life is citrus-scented perfection.  But she's not perfect.  She's probably burned a pie, too.  And by constantly leaving out life's out-takes and pursuing this ridiculous idea of perfection, she probably has few friends and has made food seem more like artwork than sustenance.  Food should not be intimidating.  It is for imbibing, and enjoying, and coming together.  Trial and error.  And I hate the way that now, people act as though mistakes are not learning opportunities.  As though you can't say, "Well, I messed up my pie, so here's what I whipped together last-minute from whatever I had in my kitchen instead."  Because God forbid anyone "whips up" anything that doesn't take hours to create.

I have moved away from reviewing the book now, and I don't think I will go back to doing so.  Much like The King's English made me reconsider the way I spend my money on books, The Bucolic Plague made me think long and hard about our pursuit of ideals- in food, in love and in life- and how it constantly sets us up for failure and disappointment.  Josh went from being a successful man with a long-term relationship and a generally happy outlook to being over-stressed, isolated and depressed.  There is a section in which he puts bird netting over his cherry tree so that his cherries stay perfect (even though they are only baking cherries and it doesn't matter how they look).  And then, when he takes the netting down, he is horrified to find that it has killed over a dozen birds that got stuck in it.  All so that he could have picturesque fruit.

That's the Martha side.  The Oprah side is about dropping everything to pursue what you think is Your Best Life- but who knows if that life will be successful?  Is it worth all the stress and living paycheck-to-paycheck to be a "gentleman farmer" when instead, you were quite comfortable on your ad exec salary?  Isn't Oprah's "live to the fullest" approach just as unattainable as Martha's "perfection at any price" one?  And don't they both cause a great deal of harm?

The Bucolic Plague tackles all these questions in a humorous and reflective manner.  I really enjoyed this book and its hard, honest look at relationships and the pursuit of dreams.  So much so that I may find it in myself to forgive Kilmer-Purcell for his unkind (and absolutely false) words on the glorious city of Chicago.

This review is based on an advance reader's edition.  I received this book for free to review.
Musings by Aarti at 12:07 AM