My goodness, could any cover more properly describe my reactions to a book than this one?!  Ah, Shortcomings.  Two people separated (via pretty flower-like snowflakes) by the same culture. Both people look quite angsty and depressed.  They used to be close, but alas, they have found themselves on opposite sides of a snow drift.

Adrian Tomine's graphic novel is about Ben, a sarcastic and vastly unhappy movie theater manager in Berkeley who is tired of the Asian scene.  He doesn't like discussing race or racism or being Asian.  His girlfriend Miko, on the other hand, fully embraces her Asian culture and is proud of who she is.  She worries, though, that all Ben really wants is a white girl.  Ben's best friend Alice wants any girl.  Yup, she's an Asian PhD candidate who has an eye for a pretty younger girl and seems to have wreaked havoc amongst the lesbian population of her school.  When Miko tells Ben she wants a break and goes to New York to pursue an internship, their relationship is tested to its limits. 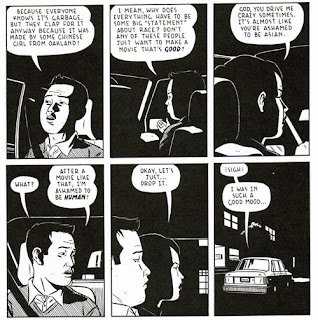 There's a whole lot going on in this book.  I think it turns some people off with the very negative attitude.  Ben has a very, very dry wit.  He would fit in well with my family.  I know others probably find him abrasive, but I think he's hilarious.  But he is also clearly very unhappy, and it is painful to spend an entire book with someone as self-absorbed as he is.  At the same time, it is interesting to see him become more aware of himself, his culture, and the way his culture impacts his vision of himself.

In many ways, Ben's awakening in this book is much like any Asian 20-something's (Asian = South and East Asian).  We don't face overt discrimination.  For the most part, we have assimilated well into the adopted culture.  Our families are affluent.  Granted, things are different now with immigrants coming in from Southeast Asia and being forced into really horrible working conditions, but many Asians in my age range had similar experiences.  Sometimes, we wonder if race really does matter to us.  After all, we're American, we're treated as American, respected as Americans and... living a pretty ideal American life. 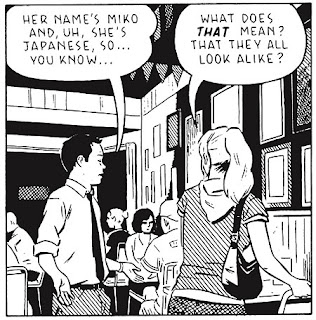 Personally, I think that is where this book really shines, but at the same time, I also think it's where Tomine might lose a good portion of his audience.  This book is not about second-generation immigrants assimilating into America and facing that horrible struggle between culture in America and culture from the home country (which is such a popular book premise these days); rather, it is about being fully assimilated and then realizing you are not exactly like everyone else and that your mind just may be more attuned to race than you might think.  And the way this realization hits Ben, through his first sexual encounter with a white girl, and through revelations on his relationship with Miko, is pretty eye-opening and not in the least unrealistic.

I did not like Ben.  He was whiny and sometimes cruel and spent most of the book being a jerk.  But I didn't like Miko, either.  They were mirror images of each other.  Ben talked about how race wasn't an issue, but his girlfriend was as proud as she could be of her Japanese heritage, and his best friend is Korean.  Miko, on the other hand, spouts off about how proud of her culture she is.  Her new friend in New York City is not even a tiny bit Asian, but he speaks Japanese (literally, to her on a bus in New York City) and knows martial arts.  It was almost laughable, really.  Ben wants nothing more than to explore a relationship with a white girl, because that would give him points for being super manly.  But if a tall white guy wants to pursue a relationship with Miko, a diminutive Asian girl, that speaks of pedophilia and all sorts of disturbing fetishes on the white guy's part. 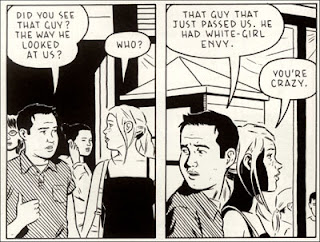 Vasilly and I talked in our review of The Absolutely True Diary of a Part-Time Indian about the way minority cultures judge people for assimilating too much.  And in this book, Tomine shows us the sexist bias that inherently exists in those judgments, too.  It's fine for a man to want to experiment, but a woman?  God, no!  Tomine also makes clear that often, experimentation isn't just "I'm a girl, so I'm going to experiment about my sexuality by kissing a girl."  No, it's about all sorts of things, including race.  And race, and people's understanding of race (and certainly people's understanding of sex), often ties into feelings of power and submission.

Even though I didn't love this book's pictures or the characters, I think it did a brilliant job in bringing to light all sorts of racism and discrimination that happen more in the mind and in very private conversations than in everyday interaction.  It gave me a lot of food for thought.
Musings by Aarti at 9:00 AM