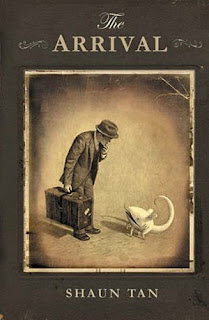 It is fitting that I can think of no words to adequately describe The Arrival because the book has no words.  It is told entirely in beautiful drawings by Shaun Tan that are reminiscent of the silent film era.  The Arrival tells the story of a man who leaves his home to make a new life for himself and his family on a distant shore.  He arrives in the foreign country with no knowledge of the language, the culture, or the people.  His loneliness is tangible, until he slowly makes friends and assimilates and learns that his new home holds friends and stories and enchantments, just as his old home did.

I loved this story.  I have begun to enjoy graphic novels more recently, but none of them made so clear to me until this one just how much depth and emotion can be conveyed through drawings.  It seems silly, really.  I enjoy visual art and paintings and think that they can convey great feeling.  And I didn't doubt that graphic novels could.  After all, I adored Blankets.  But the drawings in this book are much more traditional and perhaps because they weren't sketches or only in black and white, they made a greater impression on me.  I was enthralled by the pictures in this book as I don't think I have been since I was a child. 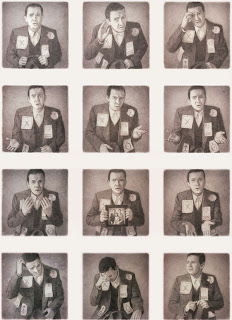 This story has so much in it.  It is the story of every immigrant to a new country.  The man we follow does not understand the language.  As you can see in the panel to the left, this made his immigration more of an ordeal as it may have been otherwise.  And I have never seen a hat used to more poignant effect than the hat in this book.  See how he holds it and twists it in his hand there?  Through the story, he loses it, fumbles for it, chases after it, is handed it, puts it on his head.  It's as though he feels without his hat, he is not himself.

And it is fitting that this book is told through illustration alone.  Tan is masterful with it.  There are different background tones for different time periods.  Flashbacks have a more sepia color, whereas the present tense is in shades of gray.  This adds to the silent film atmosphere.  It also looks gorgeous!  And as the characters do not have a shared language, they communicate through pictures, pantomimes and gestures.  And, through this, friendships are formed.  It's amazing to see the difference in the man's face when he makes his first friend.  It is transformational, and so moving. 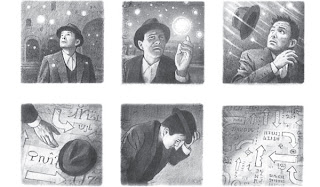 Reading this book made me wonder how difficult it must be for so many people who move so far for a new life.  Whenever I hear people say that people who move to America should all learn English, or that people should try to assimilate to European culture, or any phrase such as that, I always want to say, "But don't you realize what a courageous leap of faith it is to leave your family, your friends, everything you know to go somewhere that you don't even know the language?  That someone must be so determined to make a different life for himself to become a complete stranger in a foreign land?"  I think this book makes that so clear.  People give up so much when they pack up and move.  The loneliness in this book is palpable.  And so any kindness shown, any overture of friendship, is so gratefully received, and so wonderfully appreciated that it makes you almost want to weep. 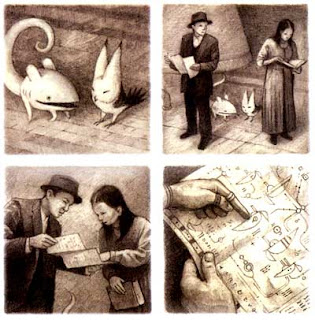 I have gone through this whole review without really touching on the illustrations.  I hope you can see for yourself with the panels how wonderful the illustrations are.  They remind me of Chris Van Allsburg's children's books, like The Polar Express and Jumanji.  He creates a fantastical place, with strange characters for language, wondrous forms of transportation and a completely new variety of animals and plants.  It's steampunkish, in a way, but also shows just how foreign a new place can be.   The drawings are beautiful.

Truly, this whole book is lovely, and I hope if you see it on a shelf somewhere, that you grab it and sit down with it, and allow yourself to become immersed in its world.
Musings by Aarti at 12:14 AM