Review: An African in Greenland 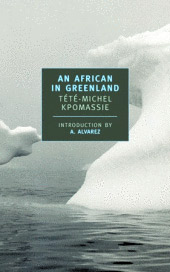 Yay, it's Spotlight Small Press Week!!  I'm very excited to help put the spotlight on another great small press publisher this week, and I hope by May 22nd, you can all immediately recognize the very distinctive covers that New York Review Books Classics has.

As I already told you why NYRB Classics is absolutely amazing in my post yesterday, I shall get straight to my review today.  I chose to review two books for this Spotlight Series, and the first one is An African in Greenland.  Sometimes, when browsing books online or in a store, I come across one with a very catchy title and must immediately take it down from the shelf (or click through, if it's the internet) and learn what it's about.  That was exactly the case with An African in Greenland (and the other book I chose to review).  What an intriguing title!

And it was definitely an intriguing book as well.  An African in Greenland follows Tete-Michel Kpomassie on his journey from Togo to Greenland in the 1950s, and then from the southern part of Greenland to the northern part.  Kpomassie was 16 when he came across a book on Greenland and decided that he must travel there.  He set off with remarkable speed on this journey, spending eight years trying to get from Togo, through northern Africa and Europe and then ending up in Greenland.  There, he spent a year living with the Inuits, learning their culture, and thoroughly enjoying himself.

This book was good for none of the reasons I originally expected.  I thought it would be more about the cultural differences between Kpomassie's life in traditional Togo and the lifestyle he adopted in Greenland.  He doesn't do much of this at all; rather, he presents Inuit culture mostly on its own, and comments on it as an outsider, but not as a representative of a very different culture.  I also thought there would be more about his route to Greenland.  He skims over most of his travel until he gets to Greenland.  That's fair, as the book is about an African in Greenland.  But the glimpses we have of his life in Africa and Europe seem so interesting that I'm sad we didn't get more of those stories.

I also expected a bit more introspection.  For example, it seemed very much like teenage rebellion against his prescribed way of life that made Kpomassie want to leave Togo and go as far away as possible.  But it must not have been because he spent eight years trying to get to Greenland.  He then says at the end that he would leave Greenland so that he could teach the Togolese about the Inuit culture.  But... why?  What would the Togolese learn from people who lived in such a completely different extreme than they did that required Kpomassie to go back and teach them?  I didn't fully follow that train of logic and I wish that Kpomassie had shared more about what happened when he returned home and shared his knowledge.

However, I did find a lot to fascinate me in this book.  The author has a very engaging style of writing, and I was never bored, even when I read about multiple meals of bloody whale blubber and raw seal.  I think this is because the Inuit culture is so very different from any I have come across.  As they don't have trees on Greenland, fire wasn't part of the culture; thus, most food is eaten raw.  The people also drink a lot.  All the time, in fact, and often to the point of being dangerously drunk.  Family life seems more ruled by children than by adults (I believe because adults become expendable quite early, when they can no longer hunt) and there was a lot of spouse swapping.

I came away with a somewhat disturbing impression of life in Greenland- that the people were generally pretty unmotivated and listless.  It is similar to the very depressing impression I have of life on a Native American reservation and I don't think the comparison is unfair.  Greenland is part of Denmark, and it seems the Danes treat the Inuits like second-class citizens, while also offering many hand-outs so that the people don't have to work that much to survive.  It seems like a system designed to fail the Inuits in the long-term.  This saddens me because the Inuit were so hospitable.  All Kpomassie had to do was arrive in a village and ask the first person he met for a place to stay, and that person acquiesced immediately, even though he and his family might be very poor and live in a fairly ramshackle place.  They share everything in Greenland, and this definitely worked in Kpomassie's favor!  I am not sure how he contributed to the household expenses of any of the places he stayed in.  He was fairly vague about that aspect of his trip, and I am not sure how much of a freeloader he was.  He seemed to get money from someone in Europe, and then he would spend money in Greenland, but while he was involved in a couple of hunts, he did not seem like he was doing much to earn his keep.  He did, however, fully participate in the hard-drinking, lots-of-eating and fairly promiscuous lifestyles of the Greenlanders.

While I don't know if I liked Kpomassie as a person, I think his writing style is very engaging and I enjoyed learning more about such a foreign culture (even if it was not at all what I expected to learn).  For that reason, I would recommend this book, but I do wish there was a sort of prequel, in which we learned more about Kpomassie's adventures on his way to Greenland, through Africa and Europe.

This review was done as part of the Spotlight Series.  See the full schedule for the NYRB tour.
Musings by Aarti at 12:00 AM