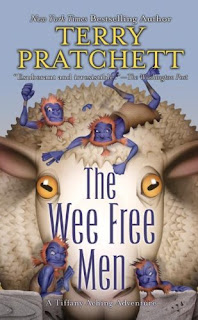 The Wee Free Men, by Terry Pratchett, is about Tiffany Aching, a nine-year-old girl with a flair for making dairy products whose family mostly doesn't notice her.  She has a toddler brother, Wentworth, who always wants "sweeties" or to go to "toy-let."  One day, Tiffany and Wentworth are warned by little blue men with red hair that there is a monster in the river by their house.  Tiffany gets rid of the monster with a frying pan, setting of a series of events including her becoming the kelda of the Nac Mac Feegle (the little blue men from the river), learning a great deal about her fabulous grandmother, sharing tales of sheep and dogs, defeating a fairy queen and, of course, coming into her own.

I love Terry Pratchett for many reasons, but one of the biggest is because I have always loved the main female characters in his story.  They are strong, witty, sensible and intelligent women.  I adore Pratchett for his ability to consistently write such excellent characters.  Tiffany Aching is no exception.  I love her.  She's the sort of nine-year-old I wish I had been.  She's the sort of girl I wish that I were now.

And while I love Tiffany for her heart and her courage, I love the Wee Free Men for their hilarious Scots brogue.  They are a feisty and amazing group of people.  There is a bonnagle, who is the bard of the group.  There is a pilot who rides birds.  They have hilarious names like Not-as-Big-as-Medium-Sized-Jock-but-Bigger-than-Wee-Jock-Jock.  They say amazing lines like, "We wuz misunderstood when we was wee bairns!' yelled Rob Anybody.  'Ye're only pickin' on us 'cause we're blue!  We always get blamed for everything'!  The polis hate us!  We wasna even in the country!" when they were very clearly in the wrong.

There is a toad.  There is, for a brief, wonderful scene, Granny Weatherwax.  There is an insufferable prig of a baron's son.  An evil queen.  Dreams and nightmares.  Horrible things and wonderful ones.  Another reason why I love Terry Pratchett is that he knows, more than any other author, that dreams and nightmares are real for the people who have them.  He takes them seriously.  He gives them respect.  He knows that "things don't stop being magic just because you [find] out how it [is] done."  And he manages to do all of this, sharing deep and important lessons in all his stories ("He said it was better to belong where you don't belong than not to belong where you used to belong, remembering when you used to belong there") without ever once talking down to his audience.  And all the while, making you snort with laughter.  The Nac Mac Feegles will make you laugh.  A lot.  I guarantee it. 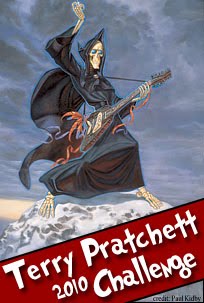 Terry Pratchett is one of my all-time favorite authors, and it saddens me that people who would love him and appreciate his humor don't even give him a chance because he's a "fantasy" author.  Yes, he writes fantasy.  But he also writes humor and satire and political commentary and life lessons and coming-of-age stories and respect and kindness and so many, many other significant things.  He has such a deep and abiding kindness and dignity that weaves its way through all his stories, and The Wee Free Men exemplifies this.  Highly recommended.

Thanks to Marg for hosting the Terry Pratchett Challenge, which motivated me to pick up the YA books in the Discworld series!
Musings by Aarti at 12:09 AM