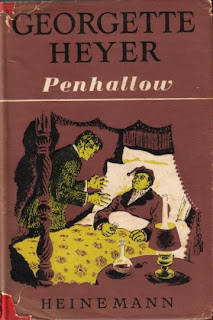 Penhallow, by Georgette Heyer, was my choice for this month's Classics Circuit.  When I heard that Heyer was this month's choice, I literally squealed with excitement as she is one of my favorite authors.  I love to read her for when I am in the mood for a light, happy and fun story.

Penhallow is not light, happy or fun.  It was a very difficult book for me to read and, much as it pains me to say it... I did not enjoy it.  I think it was well written, but the story was hard for me to connect to.  (On a side note, this is one of the reasons I no longer give ratings to books on my blog- how do you rate a well-written book with a storyline you disliked?)

Penhallow takes place in the English countryside, like all Heyer's mysteries.  Adam Penhallow is a horrible autocratic man who keeps his many children (legitimate and illegitimate) close to him, ruling every aspect of their lives with an iron will.  They are all terrified of him, and they all hate each other.  Their lives revolve around horses, getting into massive arguments with one another (and their spouses, significant others, the maids, etc.), sponging off their father, and generally hating their lives.

The murder mystery is a little different than the usual fare because the murder doesn't occur until 2/3rds of the way through the book, and the readers know who did it and why.  The remainder of the story is the fallout from this murder and how it affects everyone's future.

I have said before that Heyer's mysteries have a much more caustic sense of humor than her Regency or Georgian romances.  I would go so far as to say Penhallow forgets the humor and focuses only on the sarcasm.  I said before that this book is well-written; you can feel the tension and the anger, all simmering and coming to a boil.  There are so many characters (far more than necessary!), but after a while you realize you don't need to get them straight because no one likes anyone else, anyway.  And nearly all of them would have a motive to commit the murder that is done.

I can't help but feel that Heyer was having a really bad day/week/month/quarter when she wrote this book.  I know she was generally not a happy person in her adult life, and she often felt that she deserved to be at a higher status socially than she actually was.  These insecurities come out in full force in Penhallow, and it made me uncomfortable to read the story.  I didn't like any of the characters.  I didn't like the glimpse into Heyer that the book gave me.  I wanted to scream and shake people.  I definitely don't recommend this book as a first (or even a tenth) Heyer to read, but if you like books that focus on intricate and sometimes disturbing relationships between family members... then this is for you.

I did find two aspects of the story really interesting, based on recent reading and Georgette Heyer.  First, there is a set of twins in this book, male ones, and one is very jealous when the other falls in love with a woman and the twin relationship is changed completely.  This reminded me of the twin girls in Cassandra at the Wedding, in which a similar circumstance occurred.  I love reading books with overlapping themes of that sort in a small time frame!

Second, this book touches a theme that often comes up in Heyer's books- the idea that one is "born" into a class and that "blood will tell."  In These Old Shades, a huge aspect of the novel is that one of the characters grew up an abandoned orphan but it was so obvious she was really of high birth because of her grace, manners and interests (as opposed to a certain farmer who is only interested in horses, sheep and cows).  In this book, that theme comes up in a slightly different manner.  Penhallow of the title is a country gentleman.  He loves to ride horses and be outside and hunt, etc.  His second wife was from the city and their son dislikes horses, riding, hunting and anything else outdoorsy, so Penhallow says repeatedly that he doesn't think this child can be his.  This time, it's not so much the class distinction (though that's there, too) but the "city mouse/country mouse" distinction.  It comes up in other ways during the story that would give away some of the plot, so I can't share.  But it was interesting to see a slight shift in the way this (ridiculous) theory was applied by Heyer in her stories.

So while I didn't like Penhallow, I think it was interesting on other levels besides the story.  Also, I can't find a picture online of my edition, but I have one from 1942 that has an advertisement to buy war bonds on the back cover and mentions a lot about the war in the publisher information.  It also had a newspaper clipping inside that had a torn-off portion of an ad for buying whiskey at "pre-war" prices.  I wrote about finding this book here.  I love that I have a book by one of my favorite authors in such a historical context of an edition.  (I know that sentence makes no sense, but I don't know how else to say it!)

Do you have a wonderful edition of a book that you love and appreciate?
Musings by Aarti at 12:01 AM