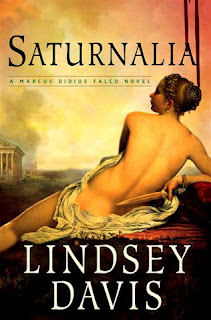 Saturnalia is the 18th book in the Marcus Didius Falco mystery series by Lindsey Davis.  This one takes place during the Saturnalia festival in Rome, the Season of Misrule when slaves are kings and kings are (supposedly) servants.  Falco is called to the Palace and learns that a German priestess, Veleda, who previously fought against the Roman Empire was brought to Rome to be paraded through the city as a prisoner before being killed.  She was lost by her keepers several days prior to the Palace calling Falco in.  Falco is asked to help find her because he saw her years ago while on a mission in Germany.

Meanwhile, his brother-in-law Justinus has gone missing and everyone believes that he is off with Veleda, with whom he had an affair prior to his marriage.  Justinus's wife is angry, his in-laws are annoyed and his beloved wife Helena Justina is upset with her brother.  As if that isn't enough, Falco's hated enemy, Anacrites, is also on Veleda's trail.  And there are a few too many homeless people turning up dead in Rome's streets for Falco to be entirely happy.

Once again, Lindsey Davis delivers an entertaining mystery novel.  Those who know my reading tastes know that I thoroughly enjoy this series, and I'm a bit sad that I'm almost completely caught up with it!  I don't read many mystery series, but I love this one.  Marcus Didius Falco is such a hilarious wise-cracker and his family life always makes me smile.  It has been great fun seeing him develop from a lonely and scruffy informer in the first books of this series to a now middle-class family man who works for the Emperor.  I really look forward to seeing him grow more as a character.

However, life for most people gets less fun as the responsibilities pile on and that's no different for Marcus.  He doesn't do all the chasing and the flirting and the drinking that he used to, and generally doesn't get into as much trouble as he used to.  He now has to pause and consider not only his own well-being, but that of his wife, his children, his dog, his adopted daughter and his slaves.  That makes it hard to be a truly dashing character.  And while I love Marcus and Helena's relationship, and I love Helena's character in general, I still miss the Falco of old.

I don't think that, generally, the later books in this series are as good as the earlier ones.  But I still thoroughly enjoy immersing myself in an ancient Rome where the people speak in dry tones, tell inappropriate jokes and make irreverent comments about the state of the Roman empire and religion.  I don't know why, but I find it hilarious to imagine people using Latin in such casual ways.  I know it's silly, as it was a commonly-used language for centuries, but I still am thoroughly amused by it.

And I guess that's why I really love Davis's series.  She brings to mind all the dust, the dirt and the hypocrisy of Rome in the first century instead of the empire we remember in such reverential tones.  I love her for that and I love this series for being so comfortable in its Roman skin.
Musings by Aarti at 12:05 AM