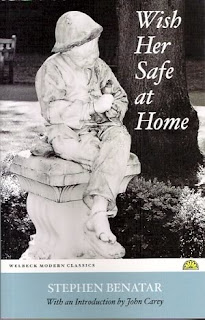 I know I talk a great deal about Stephen Benatar and his book (yes, Wish Her Safe at Home).  But, well, here's one more thing.

He's coming to the US!  Sadly, Chicago is not one of the cities that he will be visiting on his short tour, but if you live in New York or Boston, then you can go see him and tell him on my behalf how amazing a writer he is.  From a quick search for his books on Amazon.co.uk, it looks like he often goes up to people in stores, book in hand, and tells them to buy his work.  Talk about marketing yourself!  That sounds like it could be very awkward, but from what it looks like on Amazon, those that bought his books liked them.  So I suppose he knows how to pick his readers.

If you happen to be in New York or Boston at the end of February and want a literary event to make you feel intellectual and high-brow, here are the details on where and when you can catch Benatar: