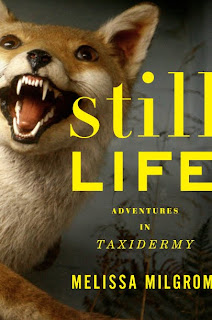 To be published by Houghton Miller Harcourt in March 2010.

Still Life is Milgrom's journey through the history and world of taxidermy, starting at a taxidermist shop in the US, continuing through museum displays, attending world taxidermy conferences, bidding at an auction of fabulous works by Mr. Walter Potter (of Mr. Potter's Museum of Curiosities), meandering through modern art, and finally culminating in her stuffing and mounting a squirrel herself.  Throughout the book, Milgrom comes back to how taxidermy has evolved, how museums present information and how people react to things of wonder.  As the book is really a series of essays in which Milgrom accounts her experiences and the people she meet, I'll just spend time highlighting things that stuck out for me.

A taxidermist's job (and a dying breed of a job it is, too) is to show animals exactly as they would be in life.  Their whole work revolves around an animal dying and then working with the animal to recreate it in detail so that it looks just as it would while it was alive.  In an era where countless species go extinct before we even discover them, this profession is alternately beloved and reviled- beloved for preserving for posterity things we might never see again, and reviled for the death of those animals.  This is further complicated by the fact that most taxidermists in the past could only make a living by stuffing hunting trophies for big game hunters.  Now, though, the serious ones work for the museums, attempting to catalog lives of animals that may or may not last much longer in the wild.  It was fascinating to meet the taxidermists referenced in this book.  I didn't think they would be so conservative and religious and pro-guns and hunting, but I suppose it makes sense.  I always thought a taxidermist would love all Earth's creatures, but I never considered that they all have been somehow linked with big game and hunting at some point in their lives. 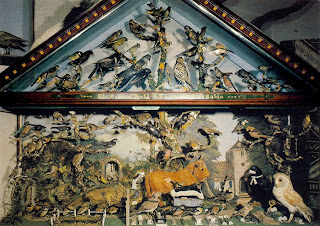 My favorite chapter was the one on Mr. Walter Potter's Museum of Curiosities.  Potter was a Victorian naturalist who stuffed animals in really odd ways.  He had cats sitting to dinner, a bird funeral, and all sorts of situations in which animals would act like humans.  He also had a lot of "freaks" in his collection- two-headed dogs, Siamese piglets, five-footed dogs.  Before you start thinking that I have really disturbing taste in art, let me explain myself.

The chapter on Victorian museums of oddities and curiosities, and the Victorian predilection for the odd and wonderful, made clear to me just how much our collective imagination and sense of wonderment has decreased as technological output increases.  Yes, the Victorians liked very odd things.  But there was no shame in it.  Rather, in that exciting era in which imagination and tradition and science were all clamoring against each other for attention, there was such an interesting melding of so many schools of thought.  Walter Potter personified this.  He was a naturalist who wanted to preserve his world.  He also had a sense of humor and an artistic bent.  And he noticed the class system prevalent in the world around him.  He managed to convey all of those societal influences in his taxidermy work, using animals as stand-in humans.  And Victorians flocked to see it!  It's amazing how many small, quirky, bizarre museums existed in the Victorian era.

I particularly liked how much the book made me think about the modern learning and museum-going experience.  Gone are the dioramas of the past, with carefully created scenes of the jungle or a prairie, complete with plants and stuffed animals in their native environment.  Instead,we have cutting-edge museums with lots of glass, interactive displays, computer screens, movie theaters, 3-D everything and all sorts of technology.  This is great, but how does it compare to the completely freakish and sometimes condenscending nature of those Victorian museums?  Yes, past museums may not have been quite as politically correct, but at least they showed us actual things, not digitized versions of them.

As Milgrom asks, have museums now become "too scripted," too sterilized?  Have exactitude, perfection and meticulous attention to detail taken the fun and wonder out of our lives?  Have we gotten so sophisticated and proud of our scientific knowledge that we have lost what made us go out and find that knowledge in the first place?  It's a compelling question and it's interesting to think about it from the perspective of a dying profession that is both vital to nature and so dependent on lax rules regarding the preservation of nature.
Musings by Aarti at 5:23 PM