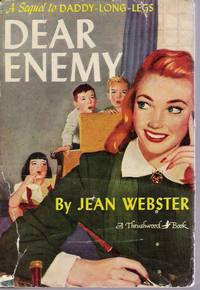 I read this book via free emails from DailyLit.

See my review of the book's prequel, Daddy-Long-Legs.

Sallie McBride leads a happy, carefree existence as a socialite before her good friend from college, Judy, gives her the opportunity to serve as the interim superintendent of an orphan asylum.  Sallie takes on the position and is at first overwhelmed by the amount of work to be done.  The children are ill-fed, ill-clothed and ill-behaved.  The trustees think she is shallow and flippant.  Her gentleman friend disapproves of her desire to live with dirty children.  But Sallie is not one to give up on a cause she believes in and she sets into her task with courage and cheer and makes big plans to change the orphanage for the better.  Her letters to Judy, the orphanage's doctor and her gentleman friend all recount her trials and triumphs in her year at the school, and introduce readers to an illuminating (if sometimes truly horrifying) account of early 20th century beliefs and methods in the proper rearing of children.

I can't actually say if I liked this book or not.  Parts of it were wonderful.  Sallie's voice rings so true in her letters- you can tell she is a fun, teasing girl who has a fine sense of the ridiculous in most of the situations that confront her.  She also is full of vim and vigor for her cause; she truly believes her efforts on behalf of the orphans in her home will make them into good people and help improve the world.  She exerts so much energy, so much creativity, into helping the lives of the people around her.  I could see her being a fabulous fighter for women's rights and suffrage, being successful through her charisma and charm and go-getter attitude.  Sallie fights societal norms to be a single woman earning her keep when everyone would prefer her to settle into marriage and child-rearing.  She hires other women to work for her who are much the same.  She refuses to settle for something dull when she could be doing something useful.  She is very much a Rosie's Riveter.

There were, however, other aspects of this book that were not quite so charming.  Ana hit on the horrors of eugenics in her review, and it's hard to read this story without cringing and shuddering over some of the methods used to deal with children.  And the very painfully practical ways that the light-hearted and kind Sallie employed:

Five other children have been sent to their proper institutions. One of them is deaf, one an epileptic, and the other three approaching idiocy. None of them ought ever to have been accepted here. This as an educational institution, and we can't waste our valuable plant in caring for defectives.


YIKES.  That is not the only instance in which Sallie uses the take-no-prisoners approach to "defective" children.  She also once thinks that she should make no efforts on behalf of a 16-year-old who got himself sick after imbibing too much alcohol.  Since his parents were also alcoholics, there is no need, apparently, to waste efforts trying to save him from its affects.

There is also a side story about a woman who, after having a child, fell into some sort of mental illness and was put into an asylum.  This brought back vivid, aching memories of the poor woman suffering from post-partum depression in The Yellow Wallpaper, and nearly made me sick with the way people were treated at the time.

It's strange how sometimes you read many books in a clump that seem to deal with different aspects of the same central theme.  As I said above, The Yellow Wallpaper shows mental illness from a terrifying, sufferer's point of view.  Wish Her Safe at Home, which I read last year, examines mental illness from the sufferer's point of view as well, but in a way in which one might justify the sufferer being happier for it than previously.  Dear Enemy doesn't really examine mental illness so much as make brief, appalling allusions to it.  This story is from the point of view of the person who believes, earnestly, that the modern methods employed at the turn of the century to deal with the illness are the best ways to cure it.  It's fascinating to see from so many different angles, but also very disturbing.

I enjoyed Dear Enemy in spite of my misgivings on many fronts, particularly the romantic one (no more to be shared there to save you all from spoilers!).  It confronts many issues and is, as Ana says, much "meatier" than its cheerful and happy predecessor, Daddy-Long-Legs.  The book dates itself a great deal with its comments on child-rearing, mental health, heredity and other concepts, but it does leave the reader feeling that Sallie is a good person who accomplished a great deal.

I am using this book for the Women Unbound challenge because I think Sallie is a great role model.  She is feisty, fun and willing to think about marriage and whether she wants it or not, against all her family's hopes.  I enjoyed her as a character and while I still have serious misgivings about the book, I recognize that it is a product of its times and am grateful that, however far we may still have to go with regards to prejudice, we have come quite far as well.
Musings by Aarti at 3:05 AM