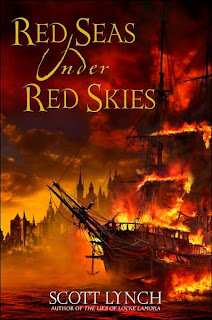 This is the second book in the seven-book Gentlemen Bastards Series.

Locke Lamora and Jean Tannen are back at it again, this time taking their considerable skills at gambling, thieving and swindling to Tal Verrar.  Tal Verrar is home of the Sinspire, a huge and exclusive casino that holds a great deal of wealth in its vault.  Unfortunately, there are some in Tal Verrar who have other ideas on how to utilize the skills of the Gentlemen Bastards.  Jean and Locke are, for the first time, forced to accede to other people's agendas and even become pirates.  But they never lose sight of their original goal.

My gosh, it's a lesson in masochism to try to write plot summaries for some books!  This is one of those books that teaches that lesson.  I learned another important lesson from Red Seas Under Red Skies.  I really, really don't enjoy nautical adventure stories.  At all.

Unfortunately, I would say at least half of this novel takes place on the high seas.  I imagine Scott Lynch did a lot of research on pirates and ships and seas before writing this book; he then suffered from what so many authors seem to suffer from- feeling the need to include every bit of that research somehow in his book.  I felt like I needed a thesaurus for quite a bit of the boat sections.  Eventually, I just started skimming any conversation that had a lot of "ship terms" in it.  I also skimmed most of the fight scenes.  This, er, led to me skimming a significant portion of the book.

Scott Lynch writes "action fantasy."  It's historical, but more Wild West than medieval Europe.  It's not steampunk.  It's a very cool sub-genre, and I haven't read anything else quite like it.  I thoroughly enjoyed The Lies of Locke Lamora for that reason- it was fresh.  And I feel that I would have enjoyed this book a lot more, too, if more of it had taken place on land.  But, alas, it was all at sea.

I appreciated the character development in this book, as we got to know the sidekick much better and more deeply than we ever did before.  And the friendship that exists between Locke and Jean is so deep and wonderful to read about.  But at the same time, we learn frustratingly little about anything else.  Lynch has planned a seven-book series, though I don't know when any of the other books are coming out.  But at the end of book 2, I still have absolutely no idea what the real plot of this series is.  I have a vague inkling, but I'm sure I'll have forgotten all about it by the time the third book comes out.  We learn nothing more about the mysterious woman from Locke's past, about the Bondsmagi that seem out to get Locke, or about what might happen next.  I am sure that Lynch has an idea in his mind, but I wish he'd be a little more generous with his readers.

What it seems Lynch spends the majority of his time writing is one-liners.  This book is littered with all sorts of colorful and demeaning insults and swears, abundant wordplay and jokes, and a lot of sharp-edged conversation.  That's fine, but to me it kind of seemed like Lynch was trying to hard to find ways of showing off his astonishing collection of swear words.  He also had a couple of those scenes that are supposed to be humorous but end up just being awkward, around the concept of "the people in the room next to mine are going at it very loudly and it's disrupting my life."  Honestly, just leave those out.  Please.  It's better for everyone.  And for goodness sake, please leave out the whole "martyr for a greater cause" thing that seems to recur in almost every fantasy novel.  You're writing about pirates and thieves who loot and burn and kill people for a living, Mr. Lynch.  No need for  extra drama, over and above that.

It sounds like I really disliked the book.  I didn't, really.  I was very "meh" about the whole thing and that was disappointing for me as I bought the book in hardcover right when it came out (and then let it languish on my shelves for almost three years), and was really looking forward to an exciting adventure.  I hope the rest of the series (whenever it is published) takes place on land.  I don't think I can take another Ocean's Eleven a la Pirates of the Caribbean!
Musings by Aarti at 8:24 PM