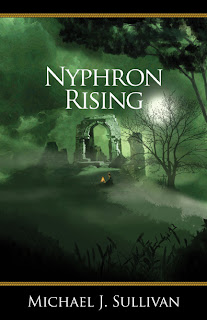 This is the third book in the Riyria Revelations.  See my reviews of books one and two.

As this is the third book in a six book fantasy series, I am not going to do much in the way of plot summary.  Let's just say that the two main characters are on the move with a royal princess, and the other side is consolidating power.  Sorry, but I don't want to give away any spoilers!

Nyphron Rising is, of the three books I've read so far in this series, my least favorite.  That's not to say I didn't like it.  I did really enjoy it, but now I hold Michael Sullivan up to a high standard.  And I don't think this book was quite as strong as his previous efforts.  This is more a result of the book being in the middle of the series than anything else.  Stuff happens, yes, but it takes some time to get there and then at the end, there is a great deal still left unfinished.  New characters are still being introduced, but you don't get closure on the previous ones.  In my opinion, you can't read and fully understand/appreciate this book without reading the two before it.  So don't read out of order!  And besides, if you miss the first book in this series, you'd miss Myron, and that's really just unacceptable.

One aspect of this series I enjoy is the lack of romance present.  There are male characters and there are female characters, but they are not falling in love all over the place the way they often do in fiction.  Rather, there are very strong platonic relationships.  I very much appreciate that.  I also just enjoy how much humor is in the books.  It's fun and light, even though the series itself is clearly about heavy and important things.
I still like the characters.  The series is, in my opinion, very male-centered.  But in this book, a female character finally starts showing some steel.  As you are all probably well aware, I generally don't like female characters.  I'm not sure if I like any of the ones in this series, either, but it's nice that some are being given a little spotlight, anyway.

So, once again- I really enjoy this fantasy series and I look forward to the second half of the series coming out over the next eighteen months or so.  I highly, highly recommend it for those who want to try more fantasy but are a bit leery of the genre.  I think it's a good one to dip your toes into.  I also recommend it to more established fans of the genre because the world-building, characters and potting are excellent.

I also recommend keeping an eye on Ridan Publishing.  Looks like they have great taste in authors!  From what I could tell on Amazon, all their books are rated very highly!

Note:  This is the last book I read as part of Galleysmith's Seriespalooza reading week.

Happy holidays, everyone!!
Musings by Aarti at 2:11 AM