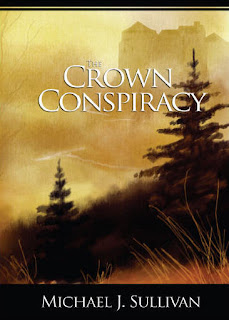 
Plot Summary:
Hadrian and Royce are two thieves operating in the kingdom of Melengar.  They do the big jobs- nobles blackmailing rivals, stealing jewels, avenging affairs.  One day, they are approached by a stranger to retrieve a sword in the royal residence.  They do so, and are framed for the murder of the king.  The princess Arista helps them escape from prison with the caveat that they take her brother, the new king, to an obscure prison to meet with a man named Esrahaddon.  What follows is an entertaining plot that includes daring escapes, millennia-old wizards, dark magic, a religious conspiracy, elves, dwarves and much more.

The Crown Conspiracy is Michael Sullivan’s first book, and the first in a series of six in the Riyria Series (all books already written and ready to be published, I am assured).  The book is less than 300 pages long, but packs a lot of character development and hints of plots to come.  Because it’s the first in such a long series, it suffers somewhat from introducing characters that disappear and hinting at larger themes that we don’t get to see, but I feel like all fantasy  series do that.  I found the language a bit jarring.  Epic fantasy tends to use a certain level of formality in its language.  This book, though set in what seems to be a Medieval-ish kingdom, has characters saying things like, “yeah,” “no kidding,” and “kid.”  And then there was one character who spoke in thous and these and ‘tises.  It made sense for that character to do so, and the language used did not impede my enjoyment of the book, but I found it a bit odd.  Just goes to show how much of a fantasy nerd I am, if I get weirded out by characters using the same language I do!

I enjoyed the characters in this book, particularly Hadrian, Royce & the sweetest monk ever.   I suspect those are three we will learn many more secrets about as the series continues, and I am eager to know more about them.  They seem fascinating, but also a lot of fun- Hadrian particularly.  What’s refreshing about this book is that none of the characters really has the fantasy character prototypes working- They aren’t excessively arrogant or brooding over their pasts.  They don’t go around committing vile acts or double-crossing everyone.  They’re refreshing.

The plot, too, was interesting and fast-paced.  I only wish I had more of a hint on the series’ over-reaching plot, but perhaps more of that will become clear in book 2.  I don’t think the plot was ground-breakingly inventive, but the world created is interesting and will over time, I think, become more and more complex with political and religious intrigue.  Overall, a fun and interesting read.  I hope this author gets attention from the fantasy-reading public as he is published by a small press.  Props to the publisher for taking a chance on a six-book series by a new author!  Sometimes I think one of the best things a book blogger can do is to bring attention to these smaller publishers and the books they publish that never get a lot of hype but that are good reads.  So here’s my plug!
Musings by Aarti at 7:16 AM