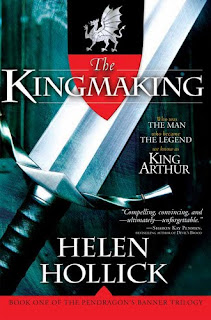 Favorite Line:  "We had so many dreams as children.  Where do they go when we grow?  Are they swallowed up by the mundane things of everyday life?  Or do we lose them, leave them behind us in the dust, for new children to find and take up?"


Plot Summary:
In the 5th century BC, Britain has been abandoned by the Romans and there is unrest amongst the Britons and the Saxons.  Uthr Pendragon leads the Britons against Vortigern, hoping to regain Britain for the British.  Though he loses, he leaves behind his son and heir- Arthur- to continue the fight.  But Arthur is young and untrained in the ways of war, so he must first work for Vortigern in his cavalry before rising up and leading against him.  He spends his years learning how to fight, learning how to lead men and inspire devotion, gaining a following and making enough money to lead a country of his own.  And then there is Gwenhwyvar, his lady love, who fights her own battles and challenges him to become a better person.  This is the first book in the Kingmaking trilogy by Hollick, a series retelling the story of Arthur in a more realistic way than that of romantic legend.  It takes up to the point when Arthur gains Excalibur and begins consolidating his power.

This review is being done a little differently than usual.  I have seen so many fun joint reviews out there in blogosphere lately that I invited Linda to try this one out with me.  You can see the first half of our review on her site, At the Court of Mur-y-Castell, here.  Then be sure to check back to finish it off here at BookLust.  As you will be able to tell, we had similar reactions to the book, though I think I liked it more than Linda- so it was a lot of fun to discuss the book and see our varied reactions!


What aspect of the book did you like best?

L:  Do I have to say something? Well ok, that she tried to tell the story as it could have been.

What aspect of the book did you least like?

L:  Everything! I am sorry but it started good then I started to loathe everyone, especially Arthur. I can't remember the last time I came across such a sorry excuse for a man. It was too black and white, the characters were not well done, there were no truth in them. So yes the characters ruined the book for me.

A:  Winifred was my least favorite person in the book.  Every time her name showed up on a page, I groaned inwardly.  I think that's why I enjoyed the beginning and the end of the book- because she was not there in them!  I have a feeling she's going to keep popping up in this series, though...

Will you continue on with this series?

L: No. I am too upset, I hate bitchy characters and TSTL [Too stupid to live] women. Everyone else seems to love this book, but I do not wanna read about a would be rapist (if he hasn't already). It was good that she tried but if this was the real story then why they they keep telling it? He would never be a man I would look up too.

Though the second half of the book was better I confess. But the book just made me too upset. It felt unrealistic. Where is Merlin when you need him?

A: I will continue with this series.  I really like Arthurian literature of any type, so I think I may be more forgiving of Arthur's character as I know this is one of many interpretations of him.  I also think Hollick is really good at telling a story, and I'm interested to see where she goes with the more well-known parts of Arthurian legend.  I liked her explanation of the Sword in the Stone/Excalibur.  It was very easy to believe and I could see it really happening.

I agree that Arthur is a very flawed character.  I am not sure if I like him or not.  It's fascinating to realize that you have spent over 500 pages with a person and not know, at the end of it, how you really feel about him.  Hopefully I'll know after books two and three!

Have you read other Arthurian books?  Where does Kingmaking rank in comparison to those?

L: No, I tried with the Marion Zimmer Bradley book but never got anywhere.  I should try again.

I really like Arthurian legend, though I haven't read that many books of it.  The most recent I tried was Sword at Sunset, but I haven't gotten far enough in that retelling (I set it down a few weeks ago) to get to the legend part.  My standard for all books is Mary Stewart's series centering around Merlin.  I think I will soon pick up The Wicked Day to finish that series.  I admit I can't really remember that much about Arthur and Gwen from that one, but I just love, love, love that version of the story.  I also read Mists of Avalon, which is the version Hollick really disliked.  I read it in high school, so I am vague on many aspects of the story, but I do remember really liking Morgaine and feeling a great deal of empathy for her during the story.  I hated Gwenhwyvar in that version (as did Hollick).

I am not sure where Hollick's story ranks for me yet as I will have to read the other two books to make sure.  I have a feeling that her version and Bernard Cornwell's version are very similar.  I hope to read Cornwell's Arthurian legend soon, too.  I have book one on my shelf, just have to bring it down :-)