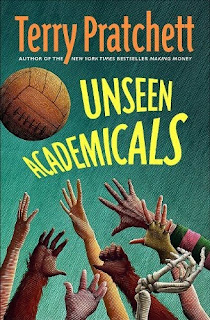 Favorite Line:
Juliet's version of cleanliness was next to godliness, which was to say it was erratic, past all understanding and was seldom seen.

Plot Summary:
Ankh-Morpork is football-crazed.  The games take place on the street, without rules, and generally devolve into gang-type fights.  Chaos ensues.  Lord Vetinari (a potential Mr. Aarti!) does not like chaos in his city and so he goes about setting things right.  He does this with the help of the portly wizards of Unseen University, a bit of friendly competition between cities and universities, a baker of legendary pies, a candle dribbler who may be more than he at first appears and chainmail that does not chafe.  But not everyone is happy with the new rules and regulations, nor are they happy all the strangers and foreigners and stragglers being allowed into Ankh-Morpork.  The game takes on a life of its own.  And, as in all Discworld books, ridiculous situations and utter hilarity follow, accompanied by a whole lot of heart and a message about our world and how we live in it.
I agree with Nymeth- writing a plot summary for a Pratchett novel is hard work.  I don't know how he comes up with his book plots, but boy am I glad he does.  Unseen Academicals is not, I admit, my favorite Discworld novel.  I have a soft spot for the Night Watch series and for the Death series.  I have many favorite Discworld characters, most of whom sadly are not present in this book.  I like the characters in Unseen Academicals but I do not love them.  I loved the character of Death within about twenty pages of Mort (mostly because I, too, could murder a curry) and it didn't take too long for me to fall for Commander Vimes or Lu-Tze the monk.  And yet that didn't happen for me with Nutt or Trev or any of the others in this book.  I felt aching empathy for Nutt and for Glenda, but I would not be sad if I did not see them in the next Discworld book, whereas I am always on the lookout for Death and TALKING IN ALL CAPITAL LETTERS.

That's not to say that this book fell flat- it was just as full of witty repartee, puns, one-liners and cultural references as any other Discworld book.  And that's what makes Pratchett so amazing to me.  He never loses the light and fun tone, but his books have are chock full of symbolism and deeper meaning.  It's there if you want to see it but if you don't, then it's still a wonderful way to entertain yourself.  Unseen Academicals, therefore, can be about football and the camaraderie of being part of a team and the staunchness of supporters and love of the game.  Or, it can be about immigration issues, racism, the frightful mob mentality, discrimination, taking a stand and choosing your own course.  It's a wonderful book with a great message, and while it's not my favorite Discworld novel, it's still better than none :-)

Football (or soccer as we know it in America) is a fascinating game to me more because of its cultural implications than anything else.  It's a game played worldwide (except here, really) and so it shines a spotlight on the best and worst of people.  It brings together people from very different backgrounds into a unified group and is, if nothing else, an excellent way of starting a conversation with someone from a different country.  But it also allows horrifyingly racist and discriminatory behavior to be voiced en masse.  For example, in the soccer game played in the book, the goalkeeper is an orangutan who is poisoned with a banana.  As seen in the below YouTube clip, this is based on actual events.  Not a poisoned banana, but a banana nonetheless.

And that is what Pratchett does, in all his books.  He takes true, powerful situations from the world and inserts them into the magic of Discworld.  I don't think any reader gets all of his references, some literary, some cultural and some commentary on current events.  But even if you don't catch them all, and even if you don't always get all the jokes and allusions, any Pratchett book you read will cause you to sit up and take notice of the world around you.
Musings by Aarti at 9:22 AM