GIVEAWAY: The Intimate Lives of the Founding Fathers 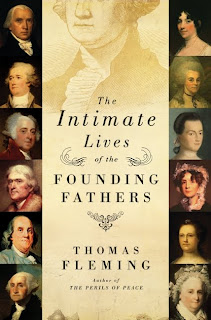 HarperCollins has once again generously offered two copies of a new non-fiction title to BookLust readers.  This giveaway is only open to readers in the US & Canada.  Sorry!

In true Rosie's Riveters' fashion, author Thomas Fleming looks at the important role of women in the lives of Washington, Jefferson, Franklin, Adams, Hamilton and Madison, and how those women impacted American history.  The result is his newest book, The Intimate Lives of the Founding Fathers.  Below is a book description.  For further details, see the book's website here:


With his usual storytelling flair and unparalleled research, Tom Fleming examines the women who were at the center of the lives of the founding fathers. From hot-tempered Mary Ball Washington to promiscuous Rachel Lavien Hamilton, the founding fathers' mothers powerfully shaped their sons' visions of domestic life. But lovers and wives played more critical roles as friends and often partners in fame.

We learn of the youthful Washington's tortured love for the coquettish Sarah Fairfax, wife of his close friend; of Franklin's two "wives," one in London and one in Philadelphia; of Adams's long absences, which required a lonely, deeply unhappy Abigail to keep home and family together for years on end; of Hamilton's adulterous betrayal of his wife and then their reconciliation; of how the brilliant Madison was jilted by a flirtatious fifteen-year-old and went on to marry the effervescent Dolley, who helped make this shy man into a popular president. Jefferson's controversial relationship to Sally Hemings is also examined, with a different vision of where his heart lay.

Fleming nimbly takes us through a great deal of early American history, as his founding fathers strove to reconcile the private and public, often beset by a media every bit as gossip seeking and inflammatory as ours today. He offers a powerful look at the challenges women faced in the late eighteenth and early nineteenth centuries. While often brilliant and articulate, the wives of the founding fathers all struggled with the distractions and dangers of frequent childbearing and searing anxiety about infant mortality—Jefferson's wife, Martha, died from complications following labor, as did his daughter. All the more remarkable, then, that these women loomed so large in the lives of their husbands—and, in some cases, their country.

This giveaway will be open until 12pm CST on Monday, November 9th.  To enter, comment on this post with your e-mail address and your favorite figure in national history (any country's history).  No extra entries this time; I am always scared that I end up counting those up wrong!

I will then randomly select two winners.  Good luck!
Musings by Aarti at 7:41 PM